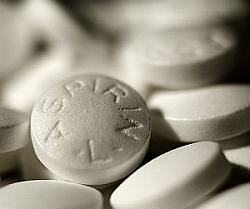 The Archives of Neurology is reporting in researching being published this month that there is some evidence of microbleeding in people that are taking aspirin on a regular basis. As we all know many people are taking a small dosage of aspirin to guard against heart problems and this research is something to be aware of although only you and your doctor can make an informed decision as to whether you should continue with that course of prevention

Aspirin and other platelet aggregation inhibitors may increase the likelihood of asymptomatic cerebral microbleeds among older adults, researchers said.

Past microbleeding — indicated by small deposits of the iron-storing protein hemosiderin on brain scans — was 71% more common with use of platelet aggregation inhibitors than without antithrombotic drugs, Monique Breteler, M.D., Ph.D., of Erasmus M.C. University Medical Center in Rotterdam, the Netherlands, and colleagues found.

Aspirin users in the population-based study were also more likely to show microbleeding limited to lobular areas of the brain, the researchers reported online in the Archives of Neurology.

Microbleeding has gained recognition over the past decade as a marker of small-vessel disease in the brain, Dr. Breteler’s group said.

Location appears to be important: strictly lobular microbleeding suggests cerebral amyloid angiopathy, in which accumulation of amyloid protein leads to degeneration of smooth muscle cells and increases risk of ruptures and hemorrhages.

Although the benefits of anticlotting medications in patients at risk for MI or ischemic stroke outweigh any risks of bleeding, the researchers said, microbleeding risk may influence treatment for some patients, such as those with signs of cerebral amyloid angiopathy.

But whether microbleeding on antithrombotic medication increases risk for symptomatic intracerebral hemorrhage remains to be seen, they noted.

The analysis involved 1,062 participants in the longitudinal, population-based Rotterdam Scan Study, all age 60 or older and free of dementia. They underwent MRI over a period of roughly one year to assess the presence and location of microbleeds.

Dr. Breteler’s group noted that if anticoagulant drugs predispose patients to symptomatic intracranial bleeds, those so affected would have been less likely to be included in the study.

An alternative explanation may involve differences in hemostatic mechanisms. “It may be that microbleed formation is more dependent on the sealing of small-vessel-wall defects by platelet aggregation than it is on clot stabilization,” they wrote.

I have had lots of problems over the years just trying to stay on track. You know, really staying focused. The problem is that you start a new … END_OF_DOCUMENT_TOKEN_TO_BE_REPLACED

Yesterday for a change I decided to cook up some quinoa for breakfast. Last fall when I was at Disney World the hotel had that at breakfast every … END_OF_DOCUMENT_TOKEN_TO_BE_REPLACED