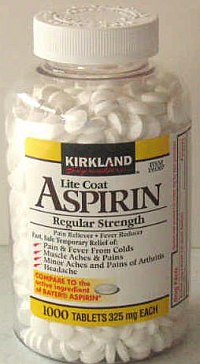 We have all believed that aspirin use will lower the risk of heart attack, mostly because it thins the blood. The problem I have always foudn though is that too much aspirin will stop the blood from clotting quickly and this in itself almost led to a quick trip to the hospital for my wife last year.

Long-term, low-dose aspirin provides no clear net value for primary prevention of cardiovascular events in apparently healthy adults, according to a meta-analysis of patient-level data.

In people not known to have cardiovascular disease, aspirin reduced composite MI, stroke, and vascular death rates to 0.51% per year compared with 0.57% among controls for a relative 12% reduction, according to Colin Baigent, B.M.B.Ch., of the University of Oxford, England, and colleagues in the Antithrombotic Trialists’ Collaboration.

But the major gastrointestinal and extracranial bleeding rate rose from 0.07% per year among controls to 0.10% among those receiving aspirin for primary prevention (, the researchers reported in the May 30 issue of The Lancet.

Guidelines from the U.S. Preventive Services Task Force and the American Heart Association largely ignore any differences in bleeding risk, and recommend wide use of aspirin for primary prevention in patients at moderately elevated heart disease risk, the researchers noted.

However, there was no threshold cardiovascular risk level that appeared to have a sufficient benefit-to-bleeding risk ratio among the 95,000 participants in the six long-term primary prevention trials included in the meta-analysis, Dr. Baigent said.

“Current guidelines may need to be reviewed,” he said.

For primary prevention, “the main strategies ought to be really stopping smoking — if people smoke — then if further measures are needed, lowering blood pressure, lowering cholesterol,” Dr. Baigent said. “The benefits of adding aspirin to all that does not clearly outweigh the hazards.”

In the meta-analysis, the benefit for major coronary event risk reduction was driven by a 23% proportional reduction in nonfatal MI (0.18% with aspirin versus 0.23% for controls per year.

The number needed to treat for one year to prevent one non-fatal heart attack was 2,000, Dr. Baigent said.

No clear reduction in mortality from coronary heart disease (0.11% versus 0.12% per year) or overall mortality emerged with use of long-term, low-dose aspirin.

The relative risk reduction appeared similar for men and women  and for those at each level of cardiovascular risk  with predicted 5-year risk of coronary heart disease rising from less than 2.5% to 10% or more).

Aspirin uses and a Q and A