The Chinese have known about medicinal green tea benefits since ancient times, using it to treat everything from headaches to depression.

I originally didn’t like green tea very much but it has certainly grown on me. The big reason that Green tea is really good for you is because they are really high in antioxidants and healing anti inflammation polyphenols.

In fact, Chinese Green tea benefits have been researched and linked to helping all of the following conditions.

Preventing Lowered T-Cells Due To HIV

In lab tests, EGCG, found in green tea, was found to prevent HIV from attacking T-Cells.

Scientists in Japan have found a component of green tea can stop HIV from binding to healthy immune cells, which is how the virus spreads.

Writing in the Journal of Allergy and Clinical Immunology, the scientists said the discovery could lead to new treatments to fight the disease. Although it is not known if this has any effect on humans yet.

For example, in 1994 the Journal of the National Cancer Institute published the results of an epidemiological study indicating that drinking green tea reduced the risk of esophageal cancer in Chinese men and women by nearly sixty percent.

University of Purdue researchers recently concluded that a compound in green tea inhibits the growth of cancer cells.

In fact, they said many laboratory studies have demonstrated inhibitory effects of tea preparations and tea polyphenols against tumor formation and growth. 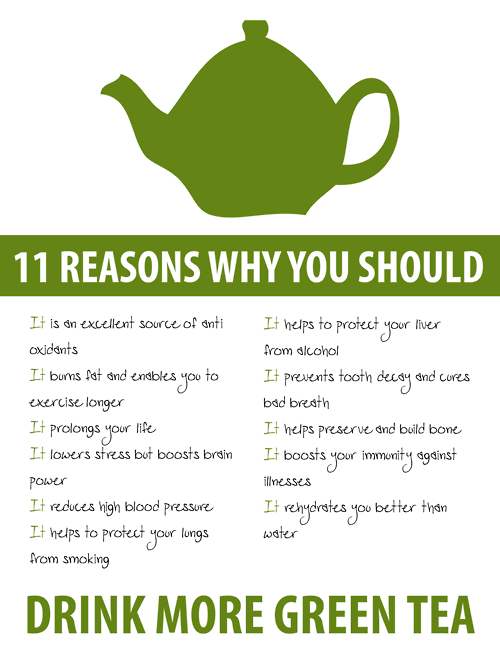 This inhibitory activity is believed to be mainly due to the antioxidative and possible antiproliferative effects of polyphenolic compounds in green and black tea.

New evidence is emerging that green tea benefits can even help dieters.

In November 1999, the American Journal of Clinical Nutrition published the results of a study at the University of Geneva in Switzerland.

Researchers found that men who were given a combination of caffeine and green tea extract burned more calories than those given only caffeine or a placebo.

Green Tea Increases fat oxidation (helps the body use fat as an energy source) and raises metabolism. These are two things that are predictive of loss.

Meanwhile, skin preparations containing green tea benefits are shown everywhere – from deodorants to creams – are starting to appear on the market.

Scientists have even discovered that applying green tea to the skin can help cure and prevent some forms of skin cancer and other skin disorders, protect the skin from long- and short-term damage from the sun’s ultraviolet rays, and act as an antibacterial agent when applied to skin infections.

Many of the broad health benefits of green tea are derived from its rich supply of plant nutraceuticals called polyphenols, of which epigallocatechin gallate (EGCG) is the most powerful.

A respite for parents of children consuming too many chocolates has reason to cheer up. The consumption of green tea has been linked to reduced incidence of tooth decay.

How Does Green Tea Work?

The secret of green tea benefits lies in the fact it is rich in catechin polyphenols, particularly epigallocatechin gallate (EGCG). EGCG is a powerful anti-oxidant: besides inhibiting the growth of cancer cells, it kills cancer cells without harming healthy tissue. 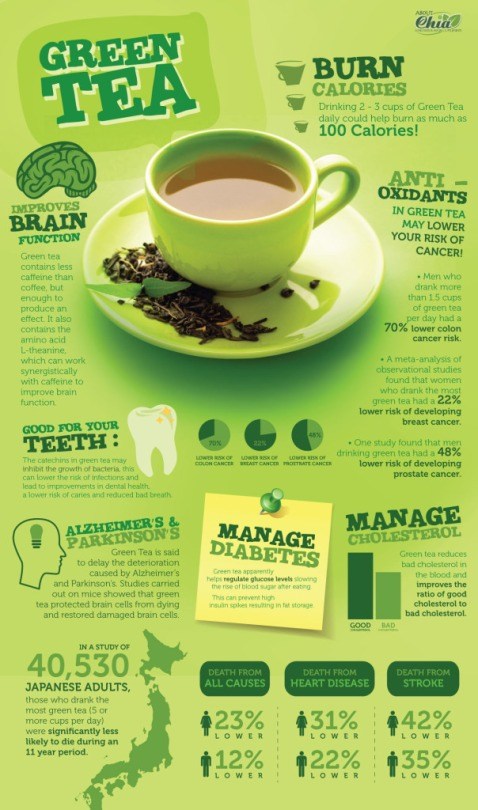 The reason Green tea & White Tea have more polyphenol antioxidants than other teas is because of the way they are processed.

Preventing the degradation of cell membranes by neutralizing the spread of free radicals (which occurs during the process of oxidation).

The health benefits of these teas are derived from the light processing of the leaves which maintain the ingredients like Catechin that research is now demonstrating to be beneficial.

White & Green tea are often steamed or pan fired rather than being semi-fermented (oolong) or fermented (black tea). Fermentation leaches out some of these beneficial ingredients in the same way that frying food tends to reduce nutrient value that steaming does not.

It should be no surprise that steamed green tea also maintains more of its polyphenol antioxidant profile than pan-fired green tea as well.

“There is no credible scientific evidence that drinking green tea reduces the risk of heart disease”.
“FDA concludes there is no credible evidence to support qualified health claims for green tea or green tea extract and a reduction of a number of risk factors associated with CVD” (cardiovascular disease).
The FDA previously has said that green tea likely does not reduce breast, prostate or any other type of cancer risk.

In spite of the FDA’s claims, Green Tea’s medicinal benefits have been described for over 1000 years.

The Kissa Yojoki, or Book of Tea written by Zen priest Eisai in 1191, describes how drinking green tea can have a positive effect on the five vital organs, especially the heart.

Part One also explains the shapes of tea plants, tea flowers and tea leaves and covers how to grow tea plants and process tea leaves.

In Part Two, the book discusses the specific dosage and method required for individual physical ailments. Objectively speaking, skepticism of green tea’s medical benefits would not be the first time an ancient medical remedy practiced successfully in Asia was initially called into question by the Western Medical establishment.

To date, the only negative side effect reported from drinking green tea is insomnia due to the fact that it contains caffeine.

However, green tea contains less caffeine than coffee: there are approximately thirty to sixty mg. of caffeine in six – eight ounces of tea, compared to over one-hundred mg. in eight ounces of coffee.

You can see that there is a lot of anecdotal research on this. What is your personal experience with green tea? Do you believe in green tea benefits?