I can eat a couple of hot dogs. Sure some people like them but not as much as Joey Chesnut how set a record today by eating more hot dogs in 10 minutes than I thought was humanly possible.

July 4th is apparently a great day to eat hot dogs and hamburgers and Joey ate 69 and then 5 more to win an eat off to stay world champion. 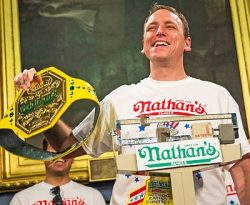 Chestnut, of San Jose, California, beat rival Takeru “The Tsunami” Kobayashi, of Japan, in a “dog off” in Coney Island where the two contestants battled to see who could finish five hot dogs first.

Chestnut and Kobayashi tied in the regulation competition, both eating 59 hot dogs and buns in 10 minutes, a record for a 10-minute competition.

“It was a little messier than I wanted it be, but I got them in me and I got them down,” Chestnut said after the competition.Organizers decided this year to change the contest from 12 minutes to 10 minutes after “a piece of old Brooklyn historical ephemera was found that stated that the first contest, held on July 4th, 1916, was a 10-minute contest,” Major League Eating spokesman Ryan Nerz said.

I can not imagine eating five hot dogs let alone eating 69 hotdogs and then eating the five. Hot Dogs are not even good for you let alone tasted very good.

Maybe it is time for me to write a post about buying crap like hot dogs and what to look for, apparently there are some real hot dog lovers out there.

How a Dog Helped my Relationship