A direct evaluation of fitness is by strength tests, which in a general way measure the relationships between performance, condition, and strength.

There are a lot of these tests around but perhaps the best known is the Kraus-Weber Test.

The Kraus-Weber (K-W) Test of Minimum Muscular Fitness has six components. This test measures several large muscle groups for flexibility and strength. The higher the degree of test rating, the greater presumably is the muscular function of the body as a whole. 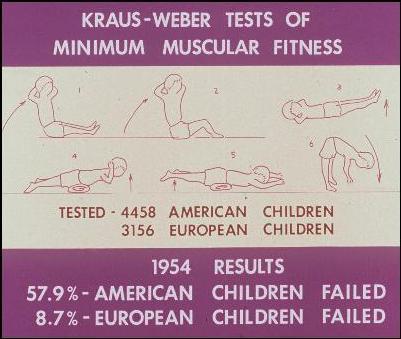 This test is of much interest since it originally arose as the result of experience in a posture clinic where an effort was made to evaluate treatment of low back pain.

Eighty percent of more than four thousand apparently healthy people were unable to pass one or more of the test items!

As these people exercised they performed better and their back complaints decreased.

But eight years later they again failed the tests and their back pains returned. They had stopped exercising.
The K-W Test is done as follows:

Kraus Weber Test No. 1. With his feet held on the ground by the examiner, the subject lies flat on his back with his hands behind the neck. Perform one sit-up.

Kraus Weber Test No. 2. The subject is in the same position except that his knees are bent with his ankles close to the buttocks. Perform one sit-up.

Kraus Weber Test No. 3. The subject lies flat on his back with his hands behind his neck. The legsstraightare lifted 10 inches off the floor. Hold this position for 10 seconds.

Kraus Weber Test No. 4. The subject lies on his stomach with a pillow under his lower abdomen and groin. The examiner holds his feet down. Lift head, shoulders, and chest off the floor and hold for 10 seconds.

Kraus Weber Test No. 5. The subject’s position is the same, but the examiner holds the chest down. With knees straight, lift legs off floor and hold for 10 seconds.

Kraus Weber Test No. 6. The subject stands erect, barefooted, and with feet together. The examiner holds the knees straight. Bend over slowly and touch the floor with the fingertips. Hold this position for 3 seconds.

The results of this test in schoolchildren are startling. Fifty-eight percent of American children failed one or more tests as opposed to 9 percent for European children. Although the validity of this test may be challenged, comparisons of groups are meaningful. Moreover, an individual using this test has clear-cut evidence of increase or decrease in flexibility and strength.

As easy as the Kraus-Weber Test seems to be, try it sometime after you have warmed up. You might be surprised at the results.

How To Test For Diabetes