A new three-in-one-pill could reduce the risk factors for heart disease and stroke by 50 per cent and revolutionize prevention of these medical conditions, which kill thousands of Canadians every year, according to a study released yesterday.

The study, published in the Lancet, showed that when blood-pressure medications, Aspirin and cholesterol-lowering medication were taken together in one pill, known as the Polycap, they were just as effective as when taken separately.

“People could take a pill a day and, literally, keep the doctor away,” said Salim Yusuf, a cardiologist and the study’s lead author. 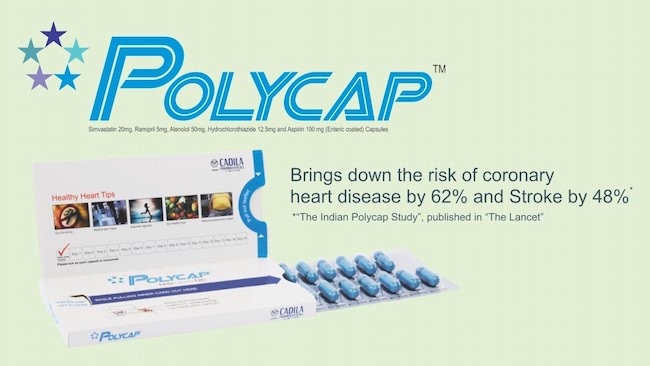 The Polycap contains the dosage of a baby Aspirin, three different blood-pressure-lowering drugs (atenolol, ramipril and thiazide) and the generic version of a statin drug, which lowers cholesterol.

Polycap promises one pill is easier for patients to remember to take, cheaper to manufacture and less onerous for doctors to prescribe, says Dr. Yusuf, head of the Population Health Research Institute at McMaster University in Hamilton.

The study also found there were fewer side effects than when the drugs, which lower blood pressure, heart rate and cholesterol, and suppress clotting, are taken separately.

“You can put these pills together and they work,” Dr. Yusuf said.

The Lancet study shows the Polycap, also known as the polypill, passed the first hurdle. But researchers must now assess whether it reduces the incidence of heart attacks and strokes.

“That is the billion-dollar question,” said Dr. Yusuf, noting there are already clinical trials under way. “The theory is, the degree to which these risks are lowered should lead to the halving of incidents of strokes and heart attacks.”

The Lancet study was conducted on 2,053 people in India between the ages of 45 and 80. Participants had at least one risk factor for heart disease, including Type 2 diabetes, obesity, high blood pressure, smoking or high cholesterol.

Collectively, the results show that the polypill reduces the risk of heart disease by 62 per cent and of stroke by 48 per cent.

A total of about 100 eating tips for a healthier lifestyle. These are a giant list of simple and easy eating tips that can help you live healthier … END_OF_DOCUMENT_TOKEN_TO_BE_REPLACED

Is it possible for a dieter to drink beer without getting a beer belly? Good news: Yes (with the right low calorie beers)! Bad news: No you … END_OF_DOCUMENT_TOKEN_TO_BE_REPLACED

I was told about this guy on YouTube called Alpha M a couple months back, his name is Aaron Marino but I love that he uses the name Alpha M as it … END_OF_DOCUMENT_TOKEN_TO_BE_REPLACED