Here in Canada, we have a Senate that is quite different than some other countries. The Senate in Canada has it’s members chosen by the Prime Minister and the term is for life. Once someone becomes a Senator here they don’t have to worry about their job.

Sometimes this is good, sometimes it is bad. Today this was a good thing.

Today the Senate standing committee for Social Affairs, Science, and Technology released a large report that had a cool infographic attached (I have put it in throughout this post).

This study and report gave us information that all people interested in fitness and health in Canada, as well as the US, recognise but sometimes have to let our clients know every single day.

Here are the highlights

Senate Recommendations for Diet and Health in Canada

First some perspective. 2/3 of adults and 1/3 of Canadian children are obese – this is up double and triple since 1980. This has caused a huge increase in diet-related diseases and is the cause of 10% of premature deaths. 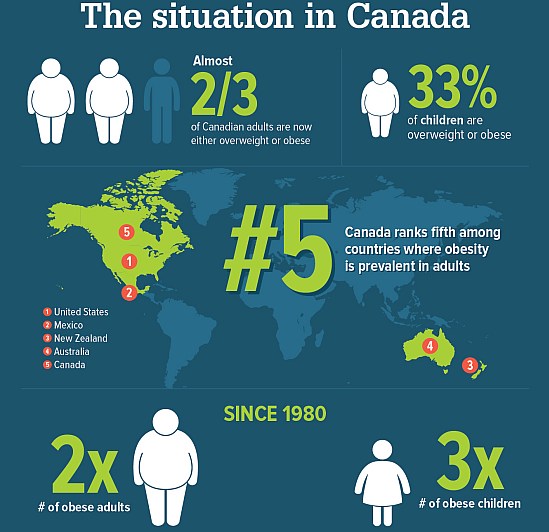 Even though it is hard to quantify, the study found that health care and lost productivity costs are 4.5 to 7.1 Billion dollars a year because of obesity. 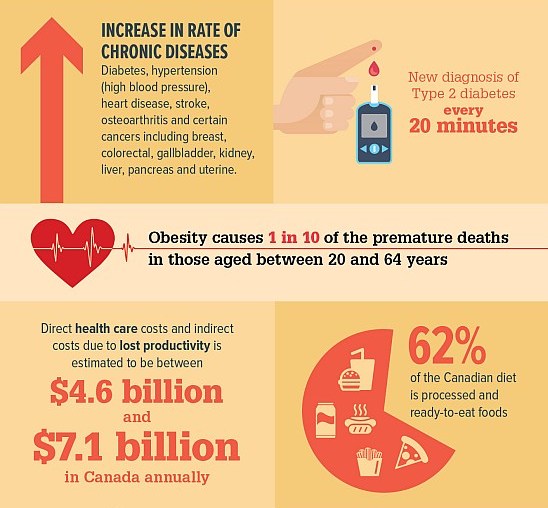 And on the other side of the equation, only 15% of adults are getting the exercise that they should which is 2 and a half hours a week.

Recommendations – From the Senate Committee

A national campaign to combat obesity. This was done with Participaction and other health programs in the past in Canada. Why not again?

A national ban on advertising of junk food to kids. This has been done with alcohol and cigarettes so this is definitely doable.

A new tax on sugary foods. I hate this idea. taxes on food only hurt the poor. This will not stop people from buying super big gulps and ice cream.

Update the Canada Food Guide without industry influence. I joke with the kids that the egg, milk and cattle lobby have enough control in Canada to be named in the food guide. Would be interested in seeing how this goes. Good idea.

Front Of Package Labeling. Again this is a good idea. Would love to know exactly what would be listed. Many of us already read the nutrition labels. Would this be somehow different? Maybe warnings? 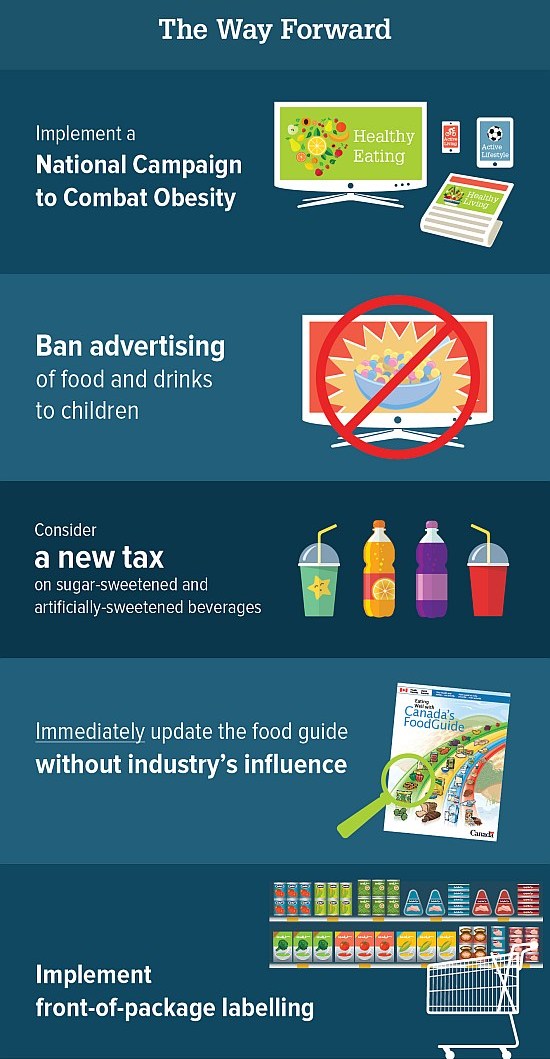 I know that lots of people will throw the “Nanny State” term out when they see this advice from the senate but so far we as Canadians don’t seem to be doing a very good job are we?

Really on both sides of the border, we have to start taking our food seriously. The report also talked about computer/screen time, as well as a lack of exercise, but the food is core to the obesity problems we fight.

I have written about what I would like to see in a revised Canada Food Guide before but we need more that that. What Canada and the US really need is a shaming of unhealthy foods instead of what we currently see on the Food Network, which is worse and more unhealthy foods

What Canada and the US really need is a shaming of unhealthy foods instead of what we currently see on the Food Network, and in our common news outlets which are a celebration of the worst meals and more unhealthy foods