Experts say that it takes 21 days to create a habit. I do not even know if this is true but the one thing that I do know is that if you do something, anything for 21 days it becomes ingrained inside you.

Let’s take that idea and run with it here shall we? Today we are as we are, if I decide that I am going to become more positive (this would make my wife and coworkers crazy) I could do one thing…

I would think in my head as much as I could all day everyday about my successes in the past and the things that are going well. This would change me from being pretty positive to excited as I would feel that there is nothing that I can not do. 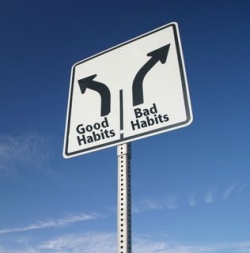 At the same time if someone wanted to become healthy and they started to jog everyday as an experienced runner would, they would be sore the second day, sore the third day, stronger the fourth day, and very powerful by the fifth day.

The habit is being formed, by the 21st day this person would be a “real runner” putting in mile after mile a week.

Often runners have trouble taking days off even when they know they have to because that cadence of exercise reminds them of who they are, the habit has already been formed.

There are really only three steps in creating new habits that will become ingrained within 21 days, and really probably more like 10 days, and these are the following:

1. Decide on the Change – This means that you are making the very concious decision that whatever you are doing starting now will be different than before.

2. Make the change often – To ingrain a change you have to consciously make that change as many times as possible. Usually if it is gaining something this is easier but if it is losing something than it will be more difficult.

For instance every single time you want a cigarette but decide against it you will be giving something up, but if every time you want to go for a walk you just get up and walk around the building you work in then you will be making an easy conscious decision that you are looking forward to.

3. Understand that this is YOU now – The final step is the acceptance that you have changed. I do not consider myself a smoker anymore because it has been 15 years or so. I also don’t feel lazy because I have proven enough times that I know it is not true.

You should make your habit like SMART goals as well to help you to be able to get them right. If you wanted to lose this 21 days to a habit is even a shorter time but it works the same way.

If you decide to eat only fruit instead of candy then you struggle for about three days and then it is over and three weeks later you have some chocolate and it starts burning in your stomach and the sugar rush gives you a headache, the habit was formed already.

My Experience in Building Lasting Habits

Years ago when I quit smoking I just imagined myself as a non smoker and then I just quit, I had been unsuccessful at cutting back so I decided that cold turkey was my best chance.

After a couple of days for struggles I was OK and I continued my working out then one day weeks later I realized that the habit was now that I looked at myself as being in good shape and that I was flushing those bad toxins of smoking, I had turned the corner.

So now it is up to you. What do you want to do now? Do you have any bad habits to reverse? Or some Good habits you would like to incorporate into your daily life?

As I said earlier, the change is the tough part and as you go along creating habits is a 21 day process so three weeks from today you can make a difference in yourself that you can be proud of.