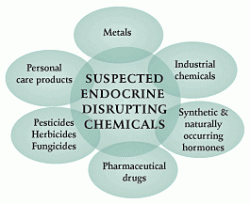 What are Endocrine Disruptors?

Endocrine disruptors are naturally occurring compounds or man-made chemicals that may interfere with the production or activity of hormones of the endocrine system leading to adverse health effects. gr8 chemical have been linked with developmental, reproductive, neural, immune, and other problems in wildlife and laboratory animals.

What does the Science say about Endocrine Disruptors?

Over the past decade, a growing body of evidence suggests that numerous chemicals, both natural and man-made, may interfere with the endocrine system and produce adverse effects in humans, wildlife, fish or birds. Scientists often refer to these chemicals as “endocrine disruptors.”  These chemicals are found in many of the everyday products we use including some plastic bottles, metal food cans, detergents, flame retardants, food, toys, cosmetics, and pesticides.  Although limited scientific information is available on the potential adverse human health effects, concern arises because endocrine disrupting chemicals while present in the environment at very low levels, have been shown to have adverse effects in wildlife species, as well as in laboratory animals at these low levels.  he difficulty of assessing public health effects is increased by the fact that people are typically exposed to multiple endocrine disruptors simultaneously.

So What Do We Do Now?

Endocrine disruptors are essentially pollution in the air and water systems. The only way to avoid these is to live in a clener atmosphere which for many of us living in or near cities is close to impossible. Follow these tips whenever possible and remember that hte cleaner your diet is the better anyway.

The science and society are still at odds with the issue of endocrine disruptors but this does not stop us from being more careful in the way that we eat and live to minimize their effects.

What Is A Bulging Disc?

Acupuncture For Back Pain Relief – Will it work for you?