???As a parent of two small children I always try to make sure that the kids get a lot of exercise to stay healthy but it is my wife that makes sure that they eat well as well.

A new report from the British Medical Journal tells us that diet is very important too. Another thing of note is watching how much the kids exercise, it seems many are more inactive than we would think.

Physically active preschoolers are on to a good thing, but exercise alone won’t keep obesity at bay as they get older, British researchers report. Instead, a combination of exercise and other lifestyle changes — especially improved diets — may be the only solution to the childhood obesity epidemic, experts say.

“Promotion of physically active play per se may not be sufficient to have an impact on the status of young children,” said lead researcher Dr. John J. Reilly, a professor of pediatric energy metabolism at the University of Glasgow, Scotland. 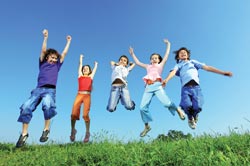 His team published its finding in the Oct. 5 online issue of the British Medical Journal.

The researchers had already shown in earlier work that Scottish preschoolers have surprisingly inactive lifestyles.

They typically get less than 30 minutes of moderate to vigorous physical activity each day, in contrast to the recommended 60 minutes a day.

In their study, Reilly’s team looked at whether exercise could reduce the weight of 545 preschool children. Some of the children took part in an active play program, which consisted of three 30 minute sessions each week. In addition, parents received guidance on how to increase physical play at home.

The researchers measured the children’s at six months and then again at one year. They also assessed the youngsters’ movement skills, and tracked whether or not the increase in activity reduced sedentary behaviors.

They found that exercise had some health benefits, but weight loss was not among them.

Exercise had little effect on , or on the activity behaviors of the children, compared with the children who did not take part in the program. However, for children in the program, additional exercise did help improve their motor and movement skills.

“We know from older studies that improved motor skills, balance, running, skipping, catching a ball, bouncing a ball, is of benefit to children socially and developmentally, and tends to promote engagement in sport, and may help reduce subsequent excess gain,” Reilly said.

There is great pressure on institutions and politicians in Britain to do something about childhood obesity, Reilly added. “While this is fine, it is possible that we will be doing things that might not have the intended effects. Our study shows the importance of rigorous evaluation of public health interventions before they are rolled out,” he said.

One U.S. expert agreed that no single program can attack the obesity epidemic.

“It should come as no great surprise that Reilly and colleagues were unable to demonstrate a significant change among nursery school children receiving a physical activity program,” said Dr. David L. Katz, director of the Prevention Research Center at Yale University School of Medicine. “The program in no way represented an ‘equal and opposite force’ to such factors as fast food, junk food, the temptations of technology, and suburban sprawl that conspire to make us fat.”

The message here is not that the program failed, Katz said, but that “we need to do more than fix one thing at a time.”

“We need to improve dietary choices and increase physical activity, in school and at home, every day. We need programs that engage families in a shared commitment to healthful practices, and that reach families via schools, work sites, clinics and community portals such as supermarkets, movie theatres and shopping malls,” Katz said. “No one program in isolation can, or should be expected to, bear that burden alone.”

Low Carb Vegetables And Why They Will Keep You Thin

Food Tips to Help Keep Your Kids From Behaviour Problems

How and Why to Keep An Exercise Journal