Last night we got to watch the first episode of Fit to Fat to Fit. Cool show although there were a lot of tears.

The premise of this fitness show is that a personal trainer does not know exactly what heavy weight customers need.

So how can the trainers better be in the trainees shoes? Why not have a very fit trainer with a 6 pack gain 60 pounds of fat and not trainer for a few months.

A lot of fun to watch and you can really feel even more for people living the real struggle to lose weight and get in shape.

So the premise above really works. The trainer in the first episode is a fellow by the name of JJ Peterson. JJ is very ripped and a very aggressive trainer (aren’t they all?). JJ meets Ray Stewart, who works in law enforcement and is more than 100 pounds over weight and wants to start a family with his wife.

To start JJ talks on the way to meeting Ray for the first time that he does not really understand how anyone would not be fully motivated to be in great shape, thin and fit, but is looking forward to getting into Rays shoes.

This changes a bit when we Ray tearfully opens up to JJ about how important it is to lose weight and at the same time shocked that JJ would gain weight to get in the same position with Ray to lose weight.

Tears in this episode, lots of them.

In 16 weeks JJ Peterson does in fact gain 60 pounds and stays away from the gym at the same time. There was a lot of suffering. Of course anyone who is a trainer has a very large part of their ego built on the pride of muscle, strrength and low bodyfat. JJ Peterson is no different. He initially loves the food, eventually hates the feeling of being bloated and driven by fatty foods, And of course totally misses the gym.

Finally after that four months the two guys get together, more tears, and they get start to see where they are both at. During that four months, surprising everyone, Ray Stewart has lost over 40 pounds. Interestingly in the first few tests we can see that JJ has kept a lot of strength and is quite obviously pretty fat while Ray is weaker but most importantly needs to work on his cardio.

JJ and Ray Get In Shape

The rest of the episode was watching the weight drop off both JJ and Ray. It was great to see the strong feelings that both of them had as training buddies even though JJ obviously knew everything that had to be done and was really a mentor to Ray.

Over the next few week the weight does really drop off of both the guys. The confidence really comes back to JJ who was really beat from gaining all the weight. Ray never had a strong sense of confidence but built it up over the few weeks they were training together.

Ray wanted to be a super hero and JJ was such a buddy convincing Ray that he was in fact the Super Hero he wanted to be, didn’t need anyone to give that to him.

What Do I Think? I Know – Just My Opinion 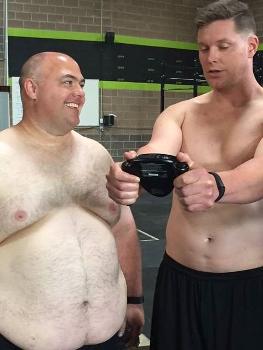 I know that this new reality show is getting a bit of flack out there. The idea looks irresponsible and in some ways perhaps it is. The fact is though that over the years about 40% of Americans have become overweight – so this is a critical problem facing the entire country.

I think that there tends to be a great divide between the trainer and the trainee. Trainers have great physical bodies, know how to eat and exercise, and love the great feeling of being fit.

On the other hand many people who are overweight are not well, feel terrible, and bounce from diet to diet to try and lose weight fast. All too often people fail with diet after diet and do not know where to turn so they tend to have no choice it seems but to give up.

Giving up does not have to be an option – Ever!

What these trainers I suspect will show us over the next few weeks on Fit to Fat to Fit is that weakness, mentally and physically, as well as extra fat on the body can be beaten. All you need is a plan for exercise and diet as well as time for them to work.

The real drawback to this show is that in an hour of swinging weight up and then down again and with as much story as possible there is not really a lot of detail given to the exercise and diet that works. Hopefully each week we will get to see a bit more of the plans and what it takes.

Should you watch this? I remember when Survivor originally started this whole reality TV industry and a friend of mine told me that it would lead to the downfall of culture and society. I don’t think it has, but I do think that the amount of TV shows that pull us into sitting on the couch is really a part of the Obesity Epidemic anyway.

I really enjoyed watching this show and I loved seeing the perspective of a trainer in gaining weight and then losing it again. It gives everyone a perspective of how people get unhealthy as well as the joy of real fitness and health. I hope you watch it and enjoy it as much as I do

Can You Be Fat and Fit?

Can you be fat and fit?