Since many people know how difficult it could be to get rid of fat from all areas of the body, most of them prefer to opt for spot fat reduction programs which let you get rid of fat in selected areas.

For example, if you want to get rid of fat belly but feel that the flabby arms are okay since they are not bothering you that much, then such programs are for you 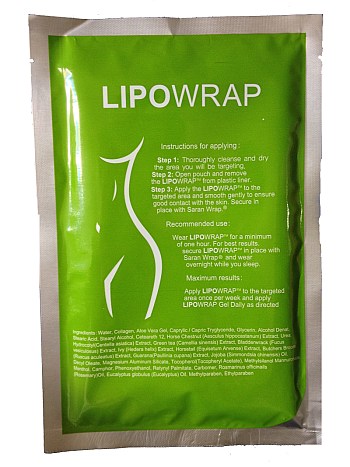 One such program is LipoWrap. Whether or not such spot fat reduction programs really work in the long term is a different question altogether and something I am going to discuss in this article.

The manufacturer of LipoWrap claims that it is a brand new way of losing weight. However, as I told you, there is nothing revolutionary and extraordinary about it as the concept of spot fat reduction has been around for a while. There are even certain workouts which claim to help you spot reduce fat.

However, just like fad diets, almost always people end up being disappointed with those spot fat reduction programs time and again. You would think it should dent in the popularity of such programs, but that doesn’t seem to be the case.

This program is called LipoWrap for a reason; it is a gel which comes packaged in a special kind of wrap. Unlike other spot fat reduction systems, you don’t need to use plasters or bandages with this program, which is a big plus point in my opinion.

This is one reason why you would get to see very few testimonials on the site itself. I won’t be surprised if one day I discover that they are fake too.

Now the negatives of Lipowrap. The first negative is that from the website itself you would never get any good details about the ingredients which went into the making of this special gel. It mostly discusses the delivery process which I think is quite irrelevant and unnecessary since the product delivery method is pretty simple.

The second negative point is that you would hardly find a positive review of this product on third party sites such as consumer forums and message boards, as I mentioned earlier.

Further, no reputed clinic has tested its effectiveness nor is there any known scientific evidence of the efficiency of such gels. As such, I really doubt it works as advertised, especially since the website itself doesn’t discuss much of it.

To this I would even add that from my experience, trying to spot reduce fat is like fighting a losing battle. No matter how hard you try to force your body to burn fat in your chosen area, it won’t fulfill your wish.

When it comes to burning fat, your body gets to decide where to start burning fat from, and this is also the reason why doing hours of ab crunches hardly help.

Between meals there is always that urge to eat a snack. I can attest to the fact that I am always hungry so when I found this list of 50 snacks under … END_OF_DOCUMENT_TOKEN_TO_BE_REPLACED

A total of about 100 eating tips for a healthier lifestyle. These are a giant list of simple and easy eating tips that can help you live healthier … END_OF_DOCUMENT_TOKEN_TO_BE_REPLACED