Well last weekend my long awaited Kidney March took place and I was as, you could expect, nervous about the prospect of walking 100 kilometers in 3 days. I have to say that it had a profound effect on me.

We started with an early morning after a late night of packing for ourselves and our kids. Actually the one thing that made us a bit crazy is that our daughter, the one with kidney disease, was in the hospital until Thursday afternoon but looked to be fine for the weekend. So the walk was a go after a drive, a bus trip, and the opening ceremonies in Millarville where the walk started.

Getting Started on Kidney March 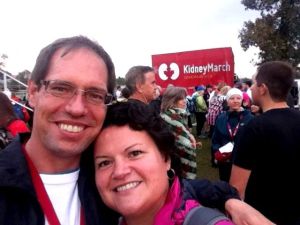 There were 170 people on the walk and as we started everything went well but about halfway through the first day my wife started having trouble with her hips and in the end she pulled out after about 25 kilometers on the first day. As luck would have it the rain started falling after that and I walked the final 10 kilometers with a lady and her daughter and one other person because as we all know misery loves company. By the end of the 8 hours on the road I was exhausted after walking 34 kilometers on hard road and barely ate and showered and fell asleep. No blisters though!

On day 2, the Saturday the rain was pouring down on us all day and I started and ended the day with soggy running shoes. The thing that I felt really kept us going was the motivation of the Kidney March Crew, they were like cheerleaders to all the walkers. Also the medical staff making sure that we were all feeling good and not so cold or blistered.

The other thing that the Kidney March Crew did was to make sure that we were well fed and hydrated every three or so kilometers. On a dark rainy day this really matters. My wife made it around 25 kilometers this day as well with problems with her stomach this time. I made it to the end but even though I was very wet and a bit cold and hungry but I sure felt better than I did after the first day. I ended up walking for about 9 hours on the Saturday but I had more energy and felt way better after a shower.

One of the greatest things ever on the second day of the Kidney March was that a tent was setup in the campground with heaters pumping in. This allowed everyone to dry shoes and jackets so that we would be much warmer in the evening and dry shoes to walk in on Sunday morning.

Sunday morning we woke up to sun and dry shoes. I can not tell you just how great it was to have my feet by warm and shoes shaped to my feet. The last day of Kidney March is the shortest as the end has a celebration at Calgary Olympic Park at 3:00 so everyone needs to have good pace to make it there on time.

There were still hills to climb on the Sunday just like the preceding two days but my wife started with a blistering walking pace that we were able to keep up unitl lunchtime. On this day, just to change things up again, my wife had some terrible ankle pain and had to have her foot wrapped and we slowed down a bit but still finished the 28 kilometers in about 7 hours or so and in time for the ending closing ceremonies.

How I Feel Now About Kidney March

I think I had the start of a couple blisters by the end but I was very fortunate to have no real blisters or leg pain that so many others had. I believe part of that is due to the fact that I have been wearing the same running shoes for a few months so they fit me great now

This Kidney March experience was for me one of the greatest experiences of my life. I was able to raise over $2200 for Kidney research thanks to so many people that donated. Also I got closer to my limits, I walked for about 24 hours over three days so I had a real chance to see how my body and mind reacted to the pain of the walking and the time on the road. I got down on myself at times, and I was very excited at other times and could feel this in my body.

Mostly though last weekend I will always remember the people I met. I heard a lot of stories from people that had been given Kidneys by others as well as people that were supporting friends or living themselves with Kidney Disease so now the experience that my family is going through does not feel so lonely. I really feel like a part of a community and this will keep me invested in the ideals of the Kidney March that I fully expect that I will walk again next year.