The dumbbell swing engages most of the muscles along the posterior chain, which basically refers to your back, from the calves and hamstrings all the way to the upper trapezius. Other muscles include the deltoids, the rectus abdominis and the forearms.

The force generated by the swing also engages significant joint activity in the knees, hips, shoulders and ankles

How To Do The Dumbbell Swing 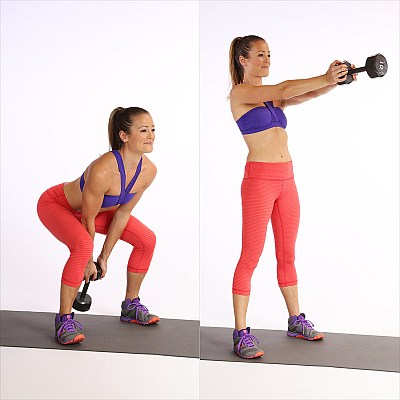 Position: A standing position with the feet fairly wide apart, the arms at the sides with a dumbbell grasped in each hand. Action: From this position, the dumbbells are swung to the front, then between the knees, bending the knees as they near the floor.

From that position, the dumbbells are swung upward in an arc to straight arms’ length overhead, by the strength of the legs, back, and arms and shoulders together.

Keeping the arms straight, the weights are permitted to descend back to the position between the knees and close to the floor and again swung to arms’ length overhead. As the weights descend, the knees are bent so that the lower back is kept relatively flat.

This Hat backed position is maintained both as the weights are swung overhead and returned toward the floor. As much of the effort as possible is made with hip and leg muscles.

Progression: Begin this movement with 10 counts, adding 2 counts each week until 20 have been performed for three periods, then add 2½ lbs. to each dumbbell and begin again at 10 counts.

Goal: Girls and women should work up to a resistance of 15 lbs. in each hand for 20 counts.

Men and boys should work up to a resistance of 30 lbs. in each hand for 20 counts.
Results: This motion will strengthen the muscles the entire length of the spine. It also will aid materially in the development of the hips and legs.

The use of these large muscle groups places a strong demand on the cardiovascular respiratory systems which is so important. The demand for oxygen thus created has a strong influence on the development of the lungs and rib box.

Comments: This is one of several combination developmental and physiological exercises. It is of great value in bringing about a full coordinated development of the entire body.

Through its demands on the organic functions, it has a powerful influence on general body growth and physiological capacities.

1 thought on “The Dumbbell Swing”