When I first decided to take this stuff I researched a lot of stuff and found that apple cider vinegar is good for lots of stuff as we will see in this article. Also I had to find out how to take this and even though you may think it is going to taste terrible in fact it is not bad.

I just take 2 teaspoons in a glass of water once in the morning and then in the evening before I go to bed.

It is important to be careful if you are going to take Apple Cider Vinegar to actually get the right kind. I got Braggs Raw organic unpasteurized apple cider vinegar (the regular stuff in the store is no use for health benefits).

This stuff says that it has “the Mother” which is just a nice way to say the silt, sediment, and enzymes are in the bottle. So shake it up before you pour the teaspoons in your glass (The mother won’t mind)

Michelle Kwon wrote this article about the history and benefits of Apple Cider Vinegar. I thought you may be interested in this as well.

In addition to being a tasty, low-calorie dressing, apple cider vinegar could be a miracle elixir for melting away fat, boosting the immune system and even restoring arthritic joints.

What is Apple Cider Vinegar

Apple cider vinegar is an old folk remedy claimed to be beneficial in treating . a list of ailments. It’s thought to guard against osteoporosis, lower blood pressure and cholesterol, heal infection, assist in digestion, and relieve everything from headaches to heartburn and hay fever.

It is still not known why apple cider vinegar provides benefits. Some proponents say it is due to its enzymes, minerals such as potassium, phosphorus, fluorine, silicon, trace minerals and pectin.

Yet research shows that it actually only contains very slight amounts of these. Others say its natural malic and tartaric acids help fight body toxins and inhibit unfriendly bacteria.

Though nothing has been clinically proven, researchers can’t discount the myriad of accounts of healing that have been collected throughout history.

The qualities of apple cider vinegar have been known for thousands of years. Hippocrates, the father of medicine, used it as an antibiotic and antiseptic in 400 BC. It was used in Biblical times as a healing agent and is mentioned in the Bible. In Paris in the Middle Ages it was sold from barrels by street vendors as a body deodorant and health drink.

Even Christopher Columbus had it on his voyage to discover America in 1492 in order to prevent scurvy. In 1820, poet Lord Byron made the vinegar and water diet popular. During the US Civil War, soldiers used it as a treatment for pneumonia and indigestion.

Apple Cider Vinegar was also used to treat wounds during World War 1. For centuries in Japan, Samurai warriors drank it for strength. The vinegar is now officially recognized in Japan as functional food because it is said to stimulate bifidus bacteria in the bowel, contributing to gastrointestinal health.

This conclusion was also reached by popular 1950s author DC Jarvis, who advised those with GI problems to consume a tonic with each meal to destroy harmful bacteria in the gut. His book Folk Medicine praised apple cider vinegar as the solution for ailments including chronic fatigue and fat reduction. He declared that cider vinegar tonic would reduce body fat because it caused fat to be burned instead of stored.

But what about the Apple Cider Vinegar science? 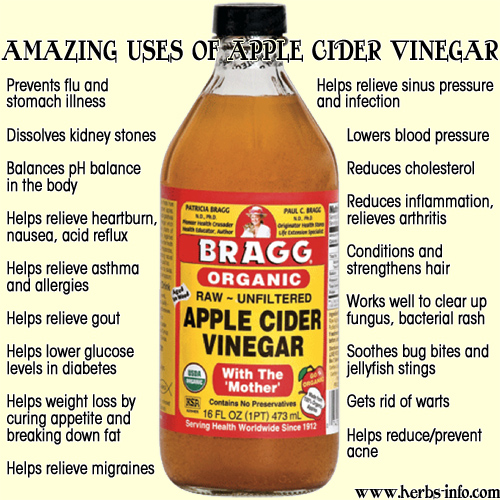 But it also reported that one study provides evidence that there may be advantages for diabetics who take vinegar.

Carol Johnston, a nutrition professor at Arizona State University, found that vinegar could help maintain blood-glucose levels. In her research with diabetic patients, those who drank a tablespoon of apple cider vinegar before meal times had lower blood glucose than those who did not.

Her trials observed that some vinegar drinkers consumed fewer calories, slimmed their waist and hip circumferences, and trimmed body fat.

What are the Benefits of Apple Cider Vinegar?

Though poor eating habits and insufficient exercise are the major causes of gain, some research suggests that a prime cause of obesity is insufficient oxidation of the blood, and that cider vinegar may boost the blood’s oxygen. However, the other possible reason for loss seems more likely; that in revitalizing the digestive system, digestive disorders including obesity can slowly be eliminated, making the body’s metabolism work better.

Two teaspoons of cider vinegar should be taken in a glassful of water before breakfast in the morning and before each meal to prevent over-eating and promote digestion. 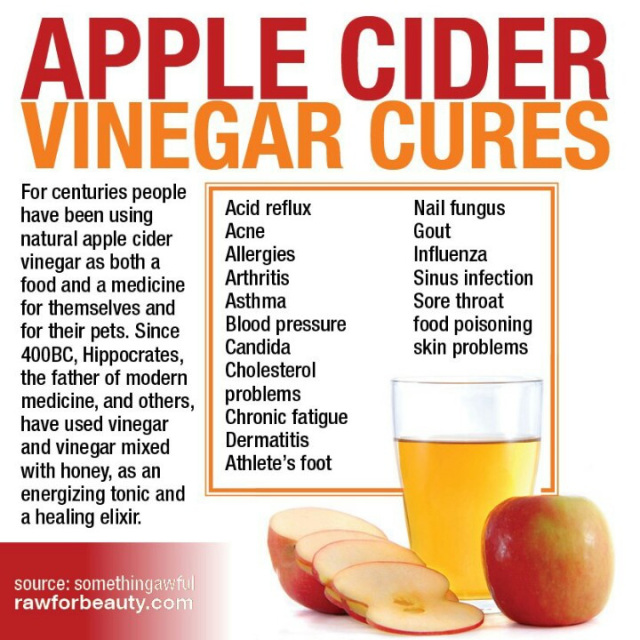 Patricia Bragg, whose father was a health food pioneer and whose company is one of the product’s leading producers, extols its benefits in her book, Apple Cider Vinegar: Miracle Health System.

She believes that the vinegar helps thin the blood and the body because of its natural acids and enzymes. She even says that people naturally crave and serve cranberry sauce (which contains four different acids) with turkey, applesauce with pork, lemon with fish, and steak with mushrooms because all of these condiments are rich in natural acids.

Animal proteins and fats have a tendency to thicken the blood and be difficult to digest, while cider vinegar and other natural acids help keep the blood healthier and aid elimination which increases loss. She’s sold over five million copies of her book that prescribes raw apple cider vinegar and raw honey in a glass of water three times daily for longevity.

How is Apple Cider Vinegar Made?

Sugar and yeast is added to start fermentation, which turns the sugars into alcohol, then is converted by acetic acid-forming bacteria into vinegar. Acetic acid gives vinegar its sour taste. It should be a rich, brownish in colour and contain a cobweb-like substance that makes it look cloudy.

Today, the most popular vinegar in supermarkets is a clear imitation vinegar made from coal tar with no health value.

I was told about this guy on YouTube called Alpha M a couple months back, his name is Aaron Marino but I love that he uses the name Alpha M as it … END_OF_DOCUMENT_TOKEN_TO_BE_REPLACED

Almost everybody in the world wishes for greater health, vitality, and stamina. The problem is that very few people are willing to take the simple … END_OF_DOCUMENT_TOKEN_TO_BE_REPLACED

Water is essential when we are trying to get healthy. The fact is that many of us do not drink enough water to stay well hydrated and although we can … END_OF_DOCUMENT_TOKEN_TO_BE_REPLACED

Papaya is a great tasting fruit that is common around the world but not so much in North America. It's a shame because the taste and texture of Papaya … END_OF_DOCUMENT_TOKEN_TO_BE_REPLACED