One year ago today I donated my left kidney to my daughter Taylor. Life changing for our family to say the least.

Taylor suffers from a genetic disease called Nephronthesis and was diagnosed with no real symptoms besides tiredness and a high Creatinine level when she was 11. At that time she had about 60% of a regular 11 year olds kidney function. We would watch it drop to about 15% or so by the time we went through the transplant last year when she was 15.

The run up to transplant was fairly slow. We thought the transplant would be in about a year after the diagnosis but those little kidneys held on somewhat for almost 4 years instead.

Not that the four years were uneventful, almost every month Taylor would end up in the hospital with dehydration from her kidneys doing a terrible job of regulating her water level. We also went through a lot of stress as a family with changing medications, missing lots of school and home schooling, as well as lots of doctors and specialists appointments. 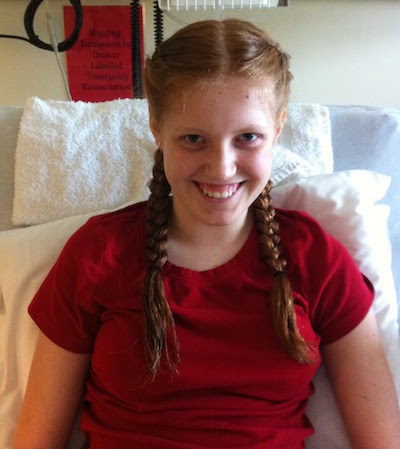 Because of the type of kidney disease that Taylor was suffering from we had a very major surgery that Taylor had to go through a few weeks before the kidney transplant. That surgery is called a Nephrectomy and is a surgery to remove her two crappy kidneys and to get her prepared for dialysis.

It may seem a bit radical to take out a persons kidneys and in fact usually in the event that a person needs a kidney transplant the new kidney would just be added to the mix, in Taylor’s case though her two kidneys would make the healing process from a transplant much more difficult as she could not retain water.

So back in May of 2015 Taylor had her two kidneys removed and started dialysis. This was really difficult for us to adjust to, as you can imagine, but Taylor knew why and we were just marching forward.

The surgery was a great success, we got trained on how to work the dialysis equipment and then we went how with Taylor continuing homeschooling and doing dialysis overnight for 10 hours or so a day at home.

There is a lot of healing that has to go on after having your kidneys pulled and so we just waited for Taylor to heal well and to get a date for the transplant. This healing is expected to take 5 weeks, we ended up waiting about 10 weeks I think and then Taylor was more than ready for the transplant surgery, I think really she was ready the week after her Nephrectomy.

My Getting Ready for Kidney Donation

As for my getting ready for transplant, the doctors said don’t worry about it but of course I did. The fact is that there is not much you can do for your kidney to be a better donor, your life up to that point dictates it all.

My own health on the other hand was very important to me. I tried to make sure to get my diet, overall health and muscle as good as possible knowing that I would be a bit of a couch potato for a while after surgery.

I was of course very anxious to get the transplant done and was tested fairly quickly and then again a year ago last Spring to make sure that I was a great match as well as a healthy kidney donor.

Our poor son Jaiden ended up missing out on some stuff and of course not getting as much attention as a little boy should get. We have always tried to keep lots of attention on him but it can be difficult. I can assure you though that this was top of mind to us and now he is as well adjusted as any crazy, hormonal, 12 year old boy can be.

I remember so clearly that morning a year ago today waking up excited in the Alberta Childrens Hospital knowing that I could finally really help my daughter for the better. I think Taylor and I were both very excited compared to my poor wife Michelle and my son Jaiden being just nervous and scared.

We both slept through our surgeries 🙂

I remember basically nothing of the afternoon and evening after the surgery, they tried to keep me comfortable with the drugs but they mostly just made me sick. Taylor on the other hand was feeling fantastic.

There is an important test that is done to test the kidneys ability to work and that is a blood test that measures the amount of creatinine in your system. If your kidneys are working well then you should have a low level of creatine and as your kidneys fail that number will go up.

The day before surgery Taylor’s creatinine level was at 1200 (a normal person is around 100-200) and two days later is was down to 109. Amazing and miraculous. 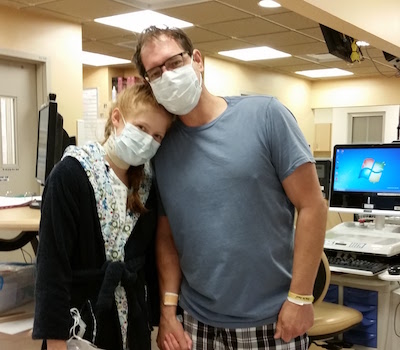 In the end I was out of the hospital four days after the surgery. I was still very tired and that lack of energy and appetite would drag on for a couple of months. Eventually though I bounced back to at least as well as before the surgery took place.

Over the first two weeks that I got back home after my kidney donation I tried walking as much as possible. I wasn’t allowed to drive yet and the walking was actually a lot more difficult than I expected. I would walk for about 45 minutes or so quite slowly at first but after I got home I would need a nap.

I was back working after about three weeks after surgery but it was just part time and nothing hard going on in my life at all.

Taylor on the other hand was full of energy after transplant and then had energy problems starting about a month after transplant. All of her kidney function was good and her body was bouncing back really great but still there seems to be some underlying issues that she are completely not kidney related but still sapping her energy.

These problems that Taylor has are very frustrating for all of us. As a fitness blogger you can imagine how it makes me feel not knowing how to heal my own daughter, and I have tried everything!

Initially we were sure that Taylor’s problems were kidney related but every single test came back good. Finally after a few months we knew that we would have to look at other things. We have been to a Psychologist, sleep studies, pain control specialist, tried anxiety medication, batteries of blood tests, but nothing has looked like the cause.

Taylor has slowly been getting better with her energy and has started running a few days a week doing a “Couch to 5K” type program but has just stuck with the first day for the last few weeks. This seems to have helped a lot and the confidence in being able to run has helped Taylor a lot as well.

I still keep getting asked by people “How are you feeling?” or “Do you notice the missing kidney?” and truthfully I now feel no different than I did before the transplant. My creatinine level is a bit higher than it was before but still solidly in the normal level. My blood pressure, resting heart rate, endurance, and physical strength are all great now so I think I have truly healed up.

Taylor now finally sees her kidney problems behind her for now. We are hoping that my old kidney will last her for 20 or 30 years and she is very very good in keeping her schedule for her anti-rejection meds, she is on two now Tacrolimus, and Azathioprine, she is also on one steroid, Prednizone, these she will always have to take but over time hopefully in small doses.

Whats Next for Taylor and I?

So our last year has been really eventful. We could be a bit happier with Taylor’s health but really things have worked out amazingly well for us. Taylor is sleeping more than most 16 year olds but is full of life and fights with her brother like any sibling would. My health has been fantastic. And really our family right now is in a much better place than we have been in many years, we even took vacation to Mexico a couple months ago!

The problem with any major health problem always goes beyond just the person suffering though. Having a sick kid leads to all sorts of problems in families and we are just like the rest, we have fought through a lot of trouble, we have had lots of family stresses.

These last few weeks now though in the Summer of 2016 seem to have been the best that we have had in a long time. We are very close as a family, we do a lot together, and for the first time in years we all seem to be healthy.