Fad diets such as Atkins recommend an almost total abstinence from carbs. Apart from that, even many experts believe that carbs are the real culprits behind the rising cases of obesity. They recommend a carb-free diet as the ‘healthy’ way to lose.

Truth however, is that Carb Free is an ‘unhealthy’ loss method.

Carbs are needed by your body for producing energy. You use this energy for performing your daily activities. This energy also helps your body in performing its ‘bodily’ functions. If your body doesn’t receive an adequate amount of carbohydrates, it will start burning off your lean muscles for the purpose of energy production. This is known as ketosis.

If you are a pregnant woman or a diabetic patient then ketosis can result in your untimely death. As you can see, carbs are your friends and not enemies. A healthy diet is one which contains a healthy dose of all nutrients, including carbs.

Carbs to Avoid, Carbs to Eat 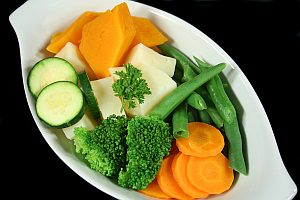 1. Which carbs to eat and which ones to avoid: As a matter of fact, there are two types of carbs: simple and complex. Simple carbs are called so because they are very simple and easy ton digest.

Simple carbs will give you a sudden outburst of energy which you obvious won’t use up instantly. The end result is that this excess energy would be stored as fat by your body.

Complex carbs, on the other hand, take more time to digest than the simple carbs. Unlike simple carbs, complex carbs won’t give you a sudden burst of energy; far from that, they will boost your metabolism and energy level in a natural way.

When your metabolic rate is high, you burn calories at a high rate.

2. Calories, rather than carbs, make you gain : Studies point out that if you regularly consume more calories than you burn off, you will gain . Unlike what the experts say, you would gain even by not eating carbs.

As per the principle, if you follow a diet that is devoid of carbs and rich only in protein and fat, you will still gain unless you restrict your calorie intake. After all, calorie is calorie, and no matter where it comes from, your body will always store excess calories as fat.

That is why it pays to count your daily calorie intake.

If that is impossible for you, your only other alternative is to workout regularly. That way, you will be burning off whatever extra calories you have.

What Are Good Carbs? What Carbs Should You Watch Out For?

Fruits and Vegetables – The Good Carbs

Some Eating Tips – and filthy carbs

1 thought on “Are Carbs that bad?”