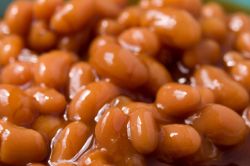 Prior to dieting, King ate a full English breakfast, which at its heart consists of bacon and eggs and may include sausage, toast, and stewed tomatoes, for lunch, and drank eight pints of lager in the pub after tea. King, from Halstead in Essex, England, made the switch from boozing to beans after being told he was at risk for bowel cancer. And his high fiber diet has been gas-free since he stopped having toast with his beans, it is reported. The diet helped King go from 420 pounds to 280 pounds.

Speaking to Britain’s Mirror, King said, “Some people think I’m mad but I love the taste and the has been dropping off.” King apparently eats six cans of beans each day, and has them with rice for lunch and with potato for his afternoon tea. His wife Cheryl told the Mirror, “He’s like a new man.”

Baked beans contain little fat and are full of fiber, although it is best to go for a low-salt variety. I like baked beans and ate almost one can one night for dinner last week but come on, how many baked means can you eat? How about the processing that goes into canning these things? I am always a bit nervous when I read the headline and then see that someone is overeating one thing, what about the rest of his diet overall?