Years ago when I first met my wife I was doing a lot of weight lifting but always had trouble getting enough protein into my diet. One of the things that I learned from her was to eat canned tuna.

Although I had grown up on the west coast and had eaten a fair amount of seafood I had not ever eaten a can of tuna before, this was about to change.

My wife made me a simple meal of cheddar macaroni and cheese (the white instead of the orange) mixed with a can of tuna and topped with chopped pickles. To say that this crazy sounding meal changed my life is an understatement. 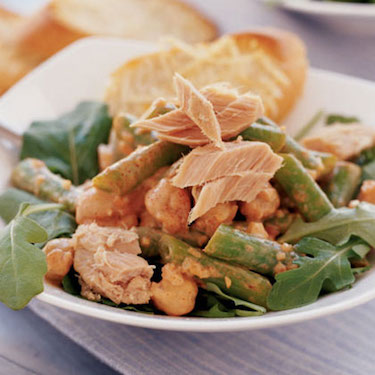 Once I moved out of my parents house and struggled to make ends meet I would always turn to tuna as a very cheap meal and a great source of protein.

Why is Canned Tuna A Good Meal?

So what is it about canned tuna that makes it great as a food for anyone interested in fitness? Well there are a few things that swim in it’s favor:

One of the things that you should do and that may seem a little strange is to rinse your tuna. To rinse your tuna you open the can and drain the water and then,while leaving the tin lid on top, rinse the tuna with cold water for 30 seconds or so. This action will get rid of the salt and sodium but will not affect the taste at all.

The Food and Drug Administration and Environmental Protection Agency recommend that women who may become pregnant, pregnant women, nursing moms and young children eat up to 12 ounces (2 average meals) of lower mercury fish and shellfish each week.

Since albacore (“white”) tuna has more mercury than light tuna, when choosing your 2 fish or shellfish-based meals, you can safely eat up to 6 ounces of albacore tuna each week (which is a healthy serving of tuna for one average meal).

Here is a video that I found with three great options for easy to make canned tuna meals in just a minute or up to 20 minutes. These are a nice way to cook a quick dinner

So how often and what can you do with a can of tuna to make a good meal?

Well the tuna itself will take care of the protein you need in a meal so making a sandwich, or my mac and cheese above will work. But the thing is that if you want a low fat food that is going to be great for you at the same time it is probably best just to rinse and throw a can of tuna onto a salad, I find this tastes great and is really good for you as well.

If you want more meals I found a bunch at the Food network site as well.

Is Dieting the Right Choice?