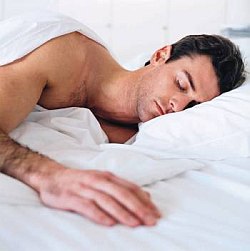 This report and study is not new news to me and I would bet that you would agree that it make sense that losing sleep and not sleeping is really unhealthy.

Men have an increased risk of premature death if they have chronic insomnia along with a short sleep duration, researchers here said.

In a longitudinal study of more than 1,700 men and women followed for more than 10 years, men with insomnia and short sleep duration were almost five times more likely to die than men who had normal sleep, said Alexandros N. Vgontzas, M.D., professor of psychiatry and director of the Sleep Research Center at Penn State University Milton S. Hershey Medical Center in Hershey, Pa.

Many people don’t realize just how important sleep is for the human mind and body. In fact, 1 in 3 people doesn’t get enough sleep. This can affect us in a multitude of ways. For example, being sleep deprived can compromise our immune system, inhibit physical progress from exercise and diet, affect our ability to focus, make us gain weight, and more, click here to know more about the health benefits of the best melatonin for sleep.

Dr. Vgontzas reported the findings at the annual meeting of the Associated Professional Sleep Societies.

“Until now, most studies had failed to show that insomnia, like sleep apnea, is associated with medical morbidity and mortality,” said Dr. Vgontzas.

But he added that insomnia was not an independent predictor of excess mortality. For the mortality risks of insomnia to be discernible, investigators needed to factor in sleep duration data, he said. Short sleep duration was defined as less than six hours uninterrupted sleep per night.

The mortality difference for women with insomnia and a short sleep duration was not significantly different from that of all women in the group. The results were unchanged when the investigators adjusted for depression and sleep-disordered breathing.

The researchers relied on self-report for diagnosis of insomnia and polysomnography for objective evidence of sleep duration.

“The novel approach in our studies is that, besides the subjective report of the patient, we have used objective information as measured in our sleep laboratory,” he said.

The investigators defined insomnia as lasting more than one year; they defined poor sleep as difficulty falling asleep or staying asleep, or as an excessively early final awakening, experts recommend to look at the factors that my be causing a lack of sleep, in many cases the problem points out to the type of mattress a person uses, having a good quality mattress is one of the most important things, make sure to check the mattress labor day sale to get one of the best ones.