Last week I made bone broth. I keep hearing about the benefits of bone broth for connective tissues and for leaky gut and other gut issues so I thought I would jump on this bandwagon.

I was listening to a podcast by Daniel Vitalis called ReWild Yourself <– This links to the episode, and on that show they were dissing chicken and saying that they would both rather throw out the white meat and just chew on the carcass instead. To me this seemed crazy but what they had to say next was really interesting.

It seems that for all the great nutrients that we get from chicken meat pale in comparison to what bone broth will give us to improve so many other parts of our bodies besides muscles and bones.

How To Make Bone Broth At Home

After doing a bit of searching it seemed that the easiest way to make a simple bone broth was to just buy a precooked chicken from the grocery store and boil the bones.

We buy one of the these chickens once every couple of weeks to make chicken salad and since my wife is horrified at the idea of throwing chicken carcasses in the freezer we have always just thrown them out.

Last week I got between the bones and the garbage.

How to Make Chicken Soup From Bone Broth 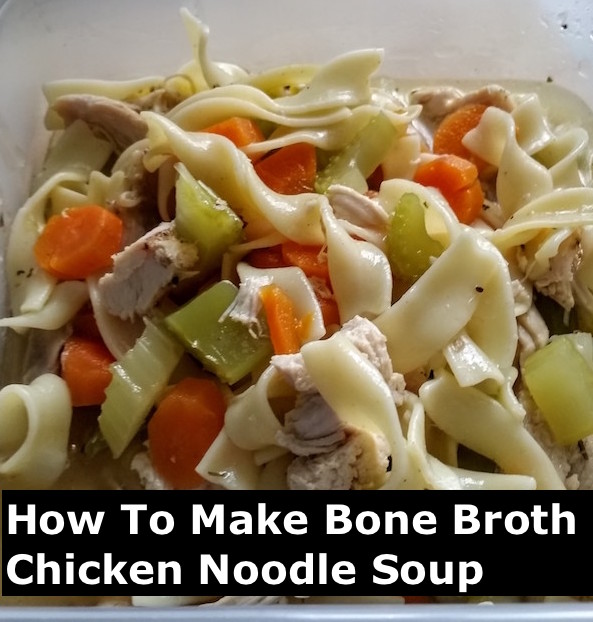 What I did was make sure most of the chicken was off the bones and then I threw the chicken bones into the crock pot with about four or five cups of water. I then put the crockpot on low and let the bones cook away for 18 or 20 hours.

Clean Out the Bones

After 18 hours the bones are supposed to become soft and most of the marrow has come out as well as all the cartilage keeping the bones together.

I was able to just use a slotted ladle to take out all of the bones and then drained everything through a strainer to get rid of any little bones and other bits.

So now I was left with just chicken broth, chicken flavored water maybe. I made a soup out of this and it worked well.

For the soup I just added carrots, celery, bay leaf, poultry seasoning, oregano, thyme, basil, salt, and pepper. and then after about 20 minutes.

Then I added some no yolk noodles – these are those wide, flat longish noodles that work great for soup and then let this simmer for another 12 minutes or so until the noodles were soft.

And then we ate chicken soup.

My kids thought the soup was a bit bland, but then I guess anything compared to those poisonous 3 minute noodles are going to be bland.

I loved it and had leftovers for a couple days of lunches.

Bone broth is full of all the nutrients needed for improving our connective tissues and sealing up our gut. If you want to know what bone broth has going for it, here is a list of all the great nutrients. Gelatin, collagen, glycine, hyaluronic acid, for connective tissues, as well as chondroitin sulphates, and glucosamine for inflammation.

So as you can see bone broth is a great addition to anyones diet. The really great thing is that it is mainly made from stuff that you already throw away and it can be eaten on it’s own or made into a soup instead.

I know that there are many recipes for making bone broth out on the YouTube and I probably watched most of them. This lady has a great recipe that I liked.

Actually a few call for a couple tablespoons of Apple Cider Vinegar but we were out. One of the recipes seemed a bit crazy in that the person made soup with the bone broth but didn’t take the bones out first so you would get spoonfuls of bones in your soup.

Making Changes. Who are you?