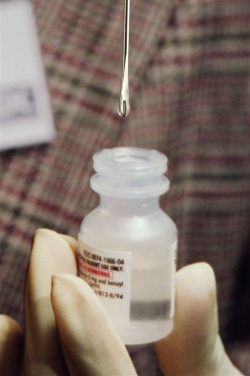 I keep hearing about the mercury in vaccines and how this may be a health issue or not. At one point people with autistic kids were blaming the mercury in the vaccines for causing autism as well as other health issues but now I believe that this same group is now targeting the vast number of diseases that are being protected against in a single vaccination. As we become better at protecting against more things I guess we need to watch out for the delivery system of these vaccines.

Anyway, I have often wondered about the amount of mercury in vaccines and why this is an issue and in knowing that mercury is poisonous and stays in the system I could not understand why it is being used at all in vaccinations.

Thimerosal is a mercury-containing preservative used in some vaccines and other products since the 1930s. The kind of mercury that is used is called Ethyl mercury from the vaccine preservative thimerosal.  Ethyl mercury leaves the blood 10 times faster than methyl mercury, on which current risk assessments are based.

Since so much alarm has been raised about mercury in any form in vaccines there has been a lot of pressure to get rid of mercury in vaccines no matter what the risk that it poses. So in July 1999, the Public Health Service agencies, the American Academy of Pediatrics, and vaccine manufacturers agreed that thimerosal should be reduced or eliminated in vaccines as a precautionary measure.

Since 2001, with the exception of some influenza (flu) vaccines, thimerosal is not used as a preservative in routinely recommended childhood vaccines.

FDA give 10 Tips for Medicine and Sick Kids