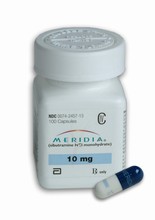 A couple years ago my wife tried Meridia, a big exercise nut and also perhaps one of the few people that has not eaten fat in 5 years. 🙂 I gotta post about my wife sometime. Anyway (I don’t think that way even a sentence) my wife was prescribed Meridia a couple of years ago in her quest to lose and it was very expensive and did not work very well at all. She used it for probably 4 months and was not happy at all with the results and we were going to be broke if we continued. Well lit looks like the day of Meridia are over.

Abbott Laboratories has agreed to voluntarily withdraw its obesity drug Meridia (sibutramine) from the U.S. market because of clinical trial data indicating an increased risk of heart attack and stroke, the U.S. Food and Drug Administration announced today.

“Meridia’s continued availability is not justified when you compare the very modest loss that people achieve on this drug to their risk of heart attack or stroke,” said John Jenkins, M.D., director of the Office of New Drugs in the FDA’s Center for Drug Evaluation and Research (CDER). “Physicians are advised to stop prescribing Meridia to their patients and patients should stop taking this medication. Patients should talk to their health care provider about alternative loss and loss maintenance programs.”

Meridia was approved by the FDA in November 1997 for loss and maintenance of loss in obese people, as well as in certain over people with other risks for heart disease. The approval was based on clinical data showing that more people receiving sibutramine lost at least 5 percent of their body than people on placebo who relied on diet and exercise alone.

Meridia Alternatives on the Market

Orlistat (sold as Xenical in prescription form and as Alli over the counter) is now the only prescription -loss drug approved for long-term use.

The FDA requested the market withdrawal after reviewing data from the Sibutramine Cardiovascular Outcomes Trial (SCOUT). SCOUT was initiated as part of a postmarket requirement to look at cardiovascular safety of sibutramine after the European approval of this drug. The trial demonstrated a 16 percent increase in the risk of serious heart events, including non-fatal heart attack, non-fatal stroke, the need to be resuscitated once the heart stopped, and death, in a group of patients given sibutramine compared to another given placebo. There was a small difference in loss between the placebo group and the group that received Meridia.

What kinds of diet pills are there?