When an individual has a panic attack, i.e. intense fear symptoms without a plausible explanation, they wonder if they’re going crazy.

They also wonder if the intense physical symptoms they feel mean something entirely different, like an underlying medical cause.

Many people think their panic symptoms are really a heart attack. There are differences between the two in symptoms as well as diagnosis. 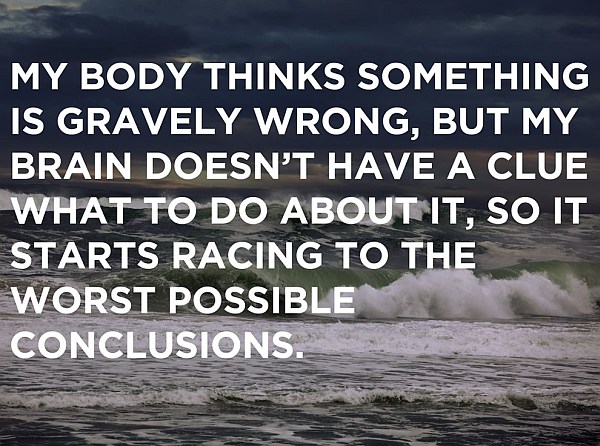 Panic attacks can happen at any time, very often during rest, and include the feeling of impending doom, terror, and loss of control whereas heart attacks may be more related to effort and exercise and any chest pain may diminish with less exercise.

A heart attack leaves a physical footprint on EKGs and panic attacks don’t, other than perhaps a fast heart rate.

A panic attack may cause an increased heart rate, but not to a dangerous level. In fact, the rate during the episode is actually less than with vigorous physical exercise.

Fainting Feelings During a Panic Attack

It is not hard to see why fear of fainting may be foremost in the mind of a panic sufferer, but rarely does that actually happen.

This fear comes about because of the similar symptoms someone would feel right before fainting – dizziness and light headedness.

But really, what the body is feeling during an attack; that increased fight or flight adrenaline rush, is the opposite of fainting. The response is aptly called fight or flight, not fight, flight, or faint.

The differences are someone who is “crazy” or schizophrenic has delusions (they’re King of the United States) or hallucinations (hearing voices) while the individual who is having an attack is having momentary feelings of irrational fear.

Additionally, a panic attack does not cause schizophrenia unless they were on their way there already with that issue and have strong family genetics that predispose them.

Feelings Of Loss of Control

Many sufferers feel they will lose control when they panic. They fear their body will do things of it’s own volition and their mind will not have any control over it.

They picture themselves getting up and running around the room saying crazy stuff while people stare at them. Having thoughts like that lead to feelings of panic!

Rest assured there is no loss of control. You may exercise the “flight” part of fight or flight and leave the situation, but you will not fall over paralyzed or become wild.

Other mistaken things people think could happen when they have a panic attack is that it could be a result of, or cause, epilepsy or an aneurysm.

These have not been proven true and should allow some peace of mind. In fact, dispelling all the above mistaken beliefs should help the sufferer to feel a little better.

Acupuncture For Anxiety And Panic Attacks