I had been interested in a supplement called CoQ10 sometimes called Coenzyme Q10 but had never tried it. Interestingly a few months ago I was contacted by the manufacturer of MitoQ which is a specialized version of CoQ10 which targets the Mitochondria of cells to be much more effective, I got a free one month supply from the company and really liked it.

What is CoQ10 and MitoQ Supposed to Do?

So first of all what is CoQ10? Simply put CoQ10 is naturally occurring in your body and is part of the energy transport system. Scientists have been experimenting with the concept of CoQ10 supplement not just for energy but because it is really good and an antioxidant that is designed to get rid of oxidation by products called free radicals in the cells of your body.

I am very close to getting all “Chemistry like” on you here but will try to stay above that so as not to put you to sleep.

Lets get rid of that oxidation by product – free radicals!

So to get rid of the results of oxidation, called free radicals we take antioxidants. These are things that will flush and heal our bodies such as glutathione, vitamin C, vitamin A, and vitamin E as well as enzymes. Insufficient levels of antioxidants, or inhibition of the antioxidant enzymes, cause oxidative stress and may damage or kill cells.

So in the end CoQ10 is a great antioxidant that will help get rid of these free radicals. Good stuff! But now there is a better product which is the targeted MitoQ

What is MitoQ compared to CoQ10? 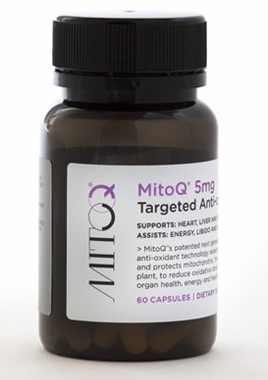 So now we are back to the MitoQ that I tried a while back. As we can see from the info above it is very important to use an antioxidant to get rid of free radicals our of our cells so that we can have a very clean and well running machine. MitoQ was created as a very targeted design of CoQ10 that targets the Mitochondria of our calls.

MitoQ was designed in the late 1990s by Michael P. Murphy and Robin A. J. Smith. At the time, both were reasearchers and biochemists. Since then over 180 publications on MitoQ have been recorded. MitoQ was designed to accumulate extensively within mitochondria in order to increase the local antioxidant capacity and thereby decrease mitochondrial oxidative damage.

In contrast to other antioxidants which distribute evenly throughout the cell. It is this approximately thousand-fold greater concentration of MitoQ within mitochondria that makes it more effective at preventing mitochondrial oxidative damage when compared to untargeted antioxidants such as CoQ10.

Even help for Parkinsons Disease

I am a pretty fit guy and take antioxidants all the time so I was not really a good candidate for the MitoQ. I did however find that it really helped me. I felt better and was disappointed when I ran out knowing that this was really making a big difference to the cells within my body and getting rid of these free radicals.

There are a lot of products and apparent secrets or wonder drugs on the market but MitoQ is a really fantastic one. The really great thing that I see here is the fact that not only is there a lot of anecdotal evidence that this product works but there is lots of real research going on that is finding that the design and way that MitoQ works is a real help to people in healing themselves and getting rid of disease. Try this stuff out if you get a chance.

Your Body And Antioxidant Foods

Between meals there is always that urge to eat a snack. I can attest to the fact that I am always hungry so when I found this list of 50 snacks under … END_OF_DOCUMENT_TOKEN_TO_BE_REPLACED

A total of about 100 eating tips for a healthier lifestyle. These are a giant list of simple and easy eating tips that can help you live healthier … END_OF_DOCUMENT_TOKEN_TO_BE_REPLACED