I went on my first float yesterday. It was great and was something that, believe it or not, I have thought about for 20 or more years but finally got to do for the first time today.

I have mentioned to my wife for years about the wish that I had to one day find a sensory deprivation tank and take a shot at seeing what the experience was all about. Lucky for me Float tanks have been becoming a lot more popular over the last couple of years and a place called Ascension Float Center opened up here in my small suburban town of Airdrie. 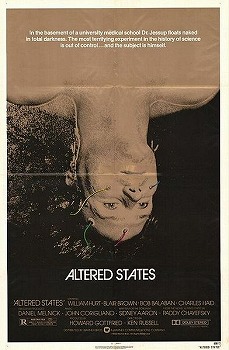 Not sure if you have ever seen the movie Altered States. it’s a movie from 1980 starring William Hurt who plays a psychologist interested in altered states of consciousness.

In the movie the character takes an herb called Ayahuasca (actually an herb that can be very dangerous to take and has again become popular) which when used before going into a sensory deprivation tank causes the character to regress to becoming a caveman.

Not sure how well this film ages as I haven’t seen it in many years but apparently the story stuck with me, you know kids and experimenting, I never did either though.

So anyway, fast forwarding to now, as a guy that is responsible and married with a couple of kids I am still really interested in the idea of what happens to your mind when you take away all of your senses including gravity.

The float tank is absolutely dark, you wear ear plugs, and most importantly you lie in water that is the same temperature as your skin – 95.8 degrees in the one that I tried – and has 1100 pounds of Epson Salts so you really do float half submerged in the water which is as close to losing any sense of gravity as you can get.

And to be clear, no, I made sure I was under the influence of absolutely nothing before going into the tank.

How Did I Prepare For My First Float

A couple of days before I went to the float center my wife gave me a gift of my first float and I went does to the center with my wife and son Jaiden as he wanted to try it first. We got a bit of a tour of the location and how things worked and then left Jaiden to try it out. Sadly he was not impressed at all.

What happened with Jaiden is that he had some cuts on his hands and any cuts get really irritated in the very salty water. Also poor Jaiden wasn’t ready for the experience of trying to have a very quiet mind so he got bored, he grabbed his phone and took pictures, he surfed Snapchat, and well, he just got bored.

I wasn’t at all dissuaded, remember I’ve been waiting 20 years to try this out.

So a couple days passed, I researched as much as I could, and then on Sunday, my birthday, I went and got into the tank for the first time.

I prepared in a few ways. I found lots of stories and articles and most didn’t really give much info on how to prepare except for a few things about the effects of floating over time. Great stuff but there were just a few things that I caught about how I should prepare for that first float. 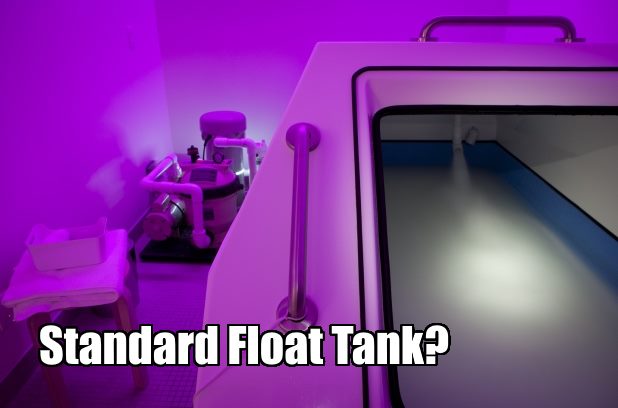 And then actually when I got to the float place really I found out that there is no real preparation needed and having no expectations makes the process a whole lot better.

What Are The Benefits Of Floating?

There are some amazing benefits of using a float tank. With the calmness there is a drop in Cortisol (the stress hormone), and an increase in Dopamine and Serotonin (pleasure and happiness hormones).

Also the fact that the tank is so full of Epson Salts means that you will absorb some of this magnesium in through your skin which is also very good for you.

Physically the relaxation of muscles is really good for other issues as well.

There are studies showing that float tanks will allow the muscles to relax which reduces inflammation as well as helping break down lactic acid in your muscles from working out. As you can imagine, without the pressure on muscles and joints this also allows stress to come off of those joints and even for a little while this helps relax all muscles.

So finally on Sunday was the day. I had my wife drive me down and drop me off and then Rian gave me a real  tour of the place to prepare and orient me with the center. There are three float tanks, a bathroom, a quiet and fairly dark sitting area, and a refresh center with water and tea.

I quickly realized that “going for a float” was more than just the time in the tank.

First I made sure to pee, having an empty bladder is one less thing to think about in the tank. Then there is a prefloat shower to make sure you are completely clean. Then I put in some earplugs. This keeps the water and sound out.

Then I laid back into the tub, it really is like an 11 inch deep bathtub that is about three feet wide and 7 feet long and is designed to make sure that everything is a good temperature, not cold, not warm, but just skin temperature.

I settled my body and stretched out. Deciding whether to have my arms over my head or by my sides in the dim light and quiet new age music. After about 5 minutes the light went out and I was in darkness with just quiet music. as I settled in my mind got quieter. Finally after another 5 or 10 minutes the music slowly quieted even more and disappeared. It was amazing how quietly I could hear the sounds of the music before it went away.

So now here I was with just my thoughts. All I could hear was my slow heartbeat and my breathing, my breathing stayed with me for the whole time. I found that my muscles were tighter than I realized, I had lots of tight joints that I could crack in the water.

It was a very peaceful experience for me. I joke often that I have three voices in my head all the time and for once my mind was really quiet. I prepared myself so that I wouldn’t fall asleep but in the end I was very conscious but completely lost track of time.

The thing that struck me most was just a feeling of peace. In the life that I lead I tend to not have many long quiet stretches with work, family, and responsibilities always taking more of my time than I should probably allow, but that is a decision that I make myself on a regular basis.

Before I knew it my 90 minutes in the tank were up and I could hear the music come back and a few minutes after that the soft light came on.

Once I got out of the tank I had a bit of a slow shower as my senses came back to me. and then I sat and got dressed again.

One of the things that Rian had told me earlier is that there is no time limit in the lounge area. He says that often people will sit and read or journal. In fact people will journal their thoughts in this different post-float state of mind for an hour and even two hours once. 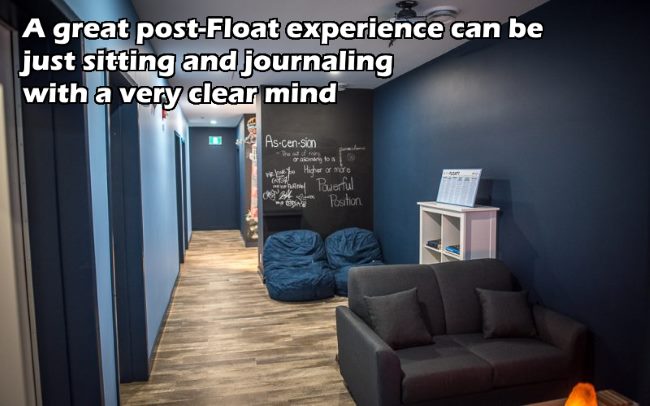 By the time I got out I had no thoughts that I wanted to journal, heck I didn’t even bring a journal (so prepared 🙂 ).

Then it was time to go. I talked with Rian for a few minutes about how things were for me. He assured me that people have lots of expectations but just like meditation there is no room for expectations, you just let it all happen.

One thing that Rian did encourage though was to do a float 3 times or so within a couple of months so that you can get more out of the experience.

I understand this, as the whole idea of losing all awareness is in it’s own way overwhelming so having the experience, a few times will allow you to become a bit better acquainted with the process and allow you to go deeper into your own thought processes without becoming distracted.

Have you ever tried a float tank? The Sensory deprivation tank is a really cool thing to me and I can’t wait to try it again. There is likely a center near you where you can try it and I really urge you to check this out.

My Experience with Chlorella