Some other common brain neurotransmitters are acetylcholine and dopamine. If neurotransmitter levels are low, especially in the case of serotonin, it can cause a person to feel terrible.

Complex emotions like attitude, mood, disposition toward contentment, mental focus, memory and others are all linked to neurotransmitters in the brain.

A deficiency in one or more neurotransmitters can cause the onset of depression, lack of motivation, memory loss, and lack of focus. So being sure that you’ve got a good supply of the building blocks the body needs to create these neurotransmitters is very important.

Serotonin and other neurotransmitters though are very complex compounds, and the body needs lots of different building blocks to be able to make them.

Not only that, but a person’s lifestyle also affects the manufacturing and release of neurotransmitters. So if you are looking to boost your levels of serotonin and other neurotransmitters naturally, you will most likely want to approach the situation from multiple angles. 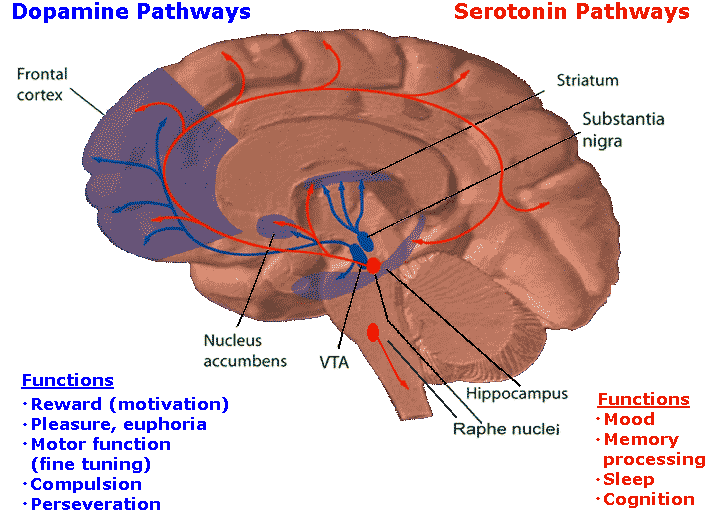 How to Increase Serotonin Naturally

The main and most important contributor to Increase Serotonin Naturally is diet. Like I said before, neurotransmitters are complex compounds and the body requires lots of building blocks in order to build.

So being sure that you’ve got a nice balance of veggies, proteins, fruit, and complex carbohydrates can help ensure that you are getting the correct building blocks.

Also, be sure that you are getting a good supply of Omega 3 essential fatty acids into your diet. These are brain foods which boost overall brain function, and have been shown to be very deficient in most diets.

The Standard American Diet is horribly deficient in a variety of essential nutrients. The foods we typically eat are usually void of nutritional elements.

Your lifestyle is also very impactful. With neurotransmitters, it’s important to not just keep adequate production levels, but also to have consistent release. The body may have an adequate supply of serotonin on hand, but might not be releasing a lot of it into the blood stream.

There are specific habits and routines that you can try that could help encourage your body to both produce and release more serotonin.

Another way to increase serotonin naturally is exercise. But before you go complaining that you don’t have the time, money, or motivation to get into a habitual exercise routine, know that even taking a short sunset walk everyday can be enough to get more serotonin into your blood stream.

And if you don’t have time or motivation for something as simple as that, then there’s really nothing more I can tell you.

Without at least a minimal level of exercise or activity, it’s difficult to get the body to produce and release enough serotonin to feel good. Aside from that, sleep too is very important.

If you have lots of stress in your life or if you aren’t getting adequate sleep at night, it’s tough for your brain to maintain a healthy level of function.

Sleep is very important in the realm of neurotransmitters. People who don’t sleep well are often groggy, fatigued, lacking mental clarity, and suffering from memory impairment.

Natural serotonin boosters can be very powerful at helping your body make and release serotonin. If you’re trying to find serotonin supplements or dopamine supplements, you must first know that the body cannot absorb them through pills. It must create them itself.

Now that you know how to increase Serotonin naturally it is up to you to get the diet and exercise right as well as sleeping and resting enough.

7 Steps To Bring You Closer To Happiness