I just saw breaking news that the American Beverage Association was successful in having the New York ban on large sugary drinks overturned. Apparently the judge in the trial found that the mayor of New York was overstepping his boundary and that the ban was arbitrary and capricious.

Well I like a sugary soda as much as the next guy but overturning this shows that the American Beverage Association cares less about the health of it’s customers than it does about some small profits from giant drinks. 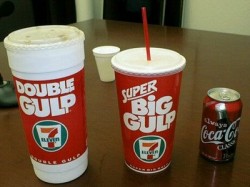 I am sure that everyone recognizes that something as big as a Super Big Gulp can not be good for anyone and in writing about this in the past I have found that most people would agree. Every now and then there is someone saying that they drink a couple of the really big bottles of pop a day (2 liter bottles here in Canada) and that there is no problem.

Yes there is a problem.

Our bodies are not meant for that much sugar at one time. Especially since the north american population in much more sedentary than it has ever been in the past. That much sugar, let alone all the other chemicals is not only going to make you unhealthy but also lead to Diabetes and obesity. There is no reason that anyone needs that kind of drink and I agree with Mayor Bloomberg this kind of drink should be banned.

I know that people will come back and comment below that it is anyones right to do whatever they want and that the state can not lrgislate what we can and can’t drink but this is also a very wrong premise. As people get fatter and fatter they get sicker and sicker and this only causes more stresses on society and the health care system that needs to look after them.

We all know people that left to their own devices will hurt themselves and this is an example of just nudging the giant soft drink away from the person that will be harmed by it. I hope the law is rewritten to get the ban back and I also hope that the American Beverage Association will be shamed into turning away from trying to stop these kinds of laws that will only help their customers.

Biggest Smoking Ban in the World?