Every year we have a new flu shot. Flu shots are nothing like regular vaccinations as the shot is created to fight a few flu viruses that are expected to be popular in a given year and then likely these same flu strains will never really come back.

So getting a flu shot every year is pretty important.

I know that there are a few people out there, more than a few actually that are against flu shots for a number of reasons. Let’s see if we can debunk a few myths today to try and save you and those around you some trouble this Winter. 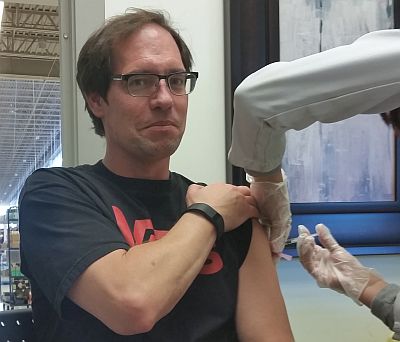 I got the flu shot and it gave me the flu – This never happens anymore. Once upon a time, there was a live virus used to try and kick the body’s defence into creating antibodies against the flu. But the practice is not followed anymore. There are a couple reasons for this.

First, having to create flu vaccines from a live virus would mean that you would need a lot of live virus to create all of those flu shots.

Second of all, giving people a live virus can be risky to people that have a weakened immune system, this means the people that really need the protection would be most at risk.

In fact, flu shots are created using antigens. These are the virus fighters themselves that your body can replicate and strengthen your defences.

I don’t get the flu anyway – It would be incredibly rare for someone to have all the antibodies against all of the flu scenarios and possibilities so someone thinking that they are just magically immune from the flu is a little non-sensical.

5% to 20% of the population gets influenza every year and it is estimated that 30% of carriers at any time do not even realize they are infecting others.

I don’t mind getting a couple days off work sick – I have to admit that I used to say this until I learned better. Influenza which is what the flu shot is designed to fight is not the same thing as the 24-hour flu. The 24-hour flu is actually norovirus or some other virus and not Influenza. Influenza is terrible and lasts for weeks.

Influenza is actually deadly – Knowing this alone makes me wish people would call the common flu something different to identify the difference.

The flu shot never works – This is not true but at least it is based on some fact. Early every year researchers forecast what strains of influenza will be popular in the coming flu season. Using this info they will create a shot that will work against 3 or 4 strains of flu. Sometimes these guesses work out well (as is expected this year) and sometimes they miscalculate (like last year).

The flu shot is dangerous and people die from it – Really? I get angry seeing these articles. Right around the time that flu shots come out there is also crazy conspiracy theories as well as fear from alternative media. I can not think of any real story of someone dying from a flu vaccine.

Also, the number of people hospitalized for the flu every year is around 200,000 people. With numbers like that, it only makes sense to get a flu shot

This year is expected to be a very heavy flu season. The flu shot will cover the following three viruses

Early this week our whole family went to get our Flu shots. Here in Alberta Canada you can get flu shots for free at the pharmacy, not sure about other jurisdictions. None of us was hurt by our flu shots although my wife and daughter had a sore arm in the evening after getting our vaccinations.

There are many things that we do as a family to protect ourselves from viruses, bacteria, and diseases. We stay clean, we try to eat and exercise well, and every year we get a flu shot. It doesn’t hurt and is a bit of insurance to make sure that you are doing just one more thing to protect yourself.

Getting Flu Shots this Fall?