Who is Affected by Rheumatoid Arthritis 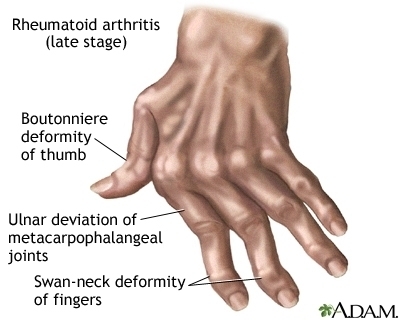 Rheumatoid Arthritis can occur at any age, from toddlers to seniors, but usually appears between the ages of 25 and 50, It occurs three times more often in women than in men.

The joints most affected are in the wrist, fingers, knees, ankles, and feet.

When the immune system attacks healthy joints, it causes inflammation of the joint lining. Inflammation of this lining can be very painful, making it difficult to walk or do regular activities such as cooking.

If the disease is not treated and controlled, it can lead to permanent damage, such as joint deformity and disability.

The Rheumatoid arthritis disease can start slowly with fatigue or a sudden attack of flu-like symptoms. There may be a slight fever.

Joints may feel warm to the touch and look red or swollen, They may be stiff and become painful as time passes, Pain is usually worse in the morning, when the body has been inactive for a while.

Other symptoms may include loss of appetite, swollen glands, burning eyes, and difficulty breathing. If you have any of these symptoms, it is important to see a doctor.

Rheumatoid arthritis is a chronic disease and therefore requires lifelong treatment. This may include medication, exercise, physical therapy, and possibly surgery

Oral pain relievers such as acetaminophen or pain relief creams that are rubbed onto the skin may ease the discomfort, but they do not lessen the swelling.

NSAIDs can do both. Corticosteroids may also be helpful-some of these are taken in pill form; others are injected into the joint to treat severe pain.

A group of drugs called DMARDs (disease­modifying anti-rheumatic drugs) can prevent further joint damage, but they cannot fix damage that has already occurred. Biologics, a form of DMARDs, are a fairly new group of drugs used to treat moderate to severe Rheumatoid arthritis.

They work by suppressing the immune system, so it won’t attack the body’s own tissue, However, this also makes it harder for the body to fight infection.

DMARDs are very powerful drugs, so your doctor needs to monitor you carefully while you are taking them.

For anyone with Rheumatoid arthritis, daily physical activity is important. Exercise strengthens the muscles that support the joints, can help reduce pain, and controls body . A physical therapist can help develop an exercise routine that is best for you.

Eating a well-balanced diet that is rich in vitamins and minerals helps the body fight arthritis. Rest and relaxation are important to allow healing and to reduce stress.

The last year or so has seen many important advances in rheumatology, many of which will likely have a growing influence on the field in 2015.

In rheumatoid arthritis, where for years rheumatologists were just trying to gain control of disease, an increasing number of studies found that in some patients, tapering of medications may be possible without substantial loss of disease control.

Growing data informed us about the safety, efficacy, and potential clinical role of tofacitinib (Xeljanz®). We also gained a deeper understanding of how and when to use corticosteroids most effectively.

Researchers are testing out a possible new treatment for rheumatoid arthritis that doesn’t require taking any pills.

The device is surgically inserted into a patient’s neck, where it rests against a nerve. Patients turn the device on for three minutes each day using a magnet. It then sends electrical impulses that reduce the number of immune cells that travel to joints, causing painful inflammation.

Bioelectronics are implantable devices that offer hope not just to arthritis patients, but also those with inflammatory bowel disease, hypertension and diabetes, according to GlaxoSmithKline.

Monique Robroek, who could hardly move a year ago even with the strongest medicine available, was able to stop taking drugs a few weeks after starting treatment with the device. She says she is now pain-free.

Rheumatoid arthritis patient Monique Robroek could hardly move a year ago even with the strongest medicine available, until she got the new device implanted for a clinical trial.

Dr. Paul-Peter Tak is supervising the research on implantable devices. “It’s very appealing to patients because they don’t like to take medicines for 30 to 40 years of their lives.”

Robroek was one of 20 severely-affected sufferers who volunteered for a study of the device in Amsterdam. More than half saw a reduction in pain.

A study reported in the Phytotherapy Research revealed that curcumin in high bioavailable form have been shown to be more effective than any rheumatoid drugs, which includes reducing tenderness and swelling of the joints, plus patients reported a higher rate of improvement altogether.

Along with the amazing benefits and incredible improvements in relieving pain far better than other drugs, patients also reported no side effects. In comparison with patients receiving NSAIDs, about 14% of them experienced side effects.

Researchers explained, “Interestingly, the curcumin group showed the highest percentage of improvement… and these scores were significantly better than the patients in the diclofenac sodium [Voltaren] group.

Thanks to the following sites for more information

Between meals there is always that urge to eat a snack. I can attest to the fact that I am always hungry so when I found this list of 50 snacks under … END_OF_DOCUMENT_TOKEN_TO_BE_REPLACED

A total of about 100 eating tips for a healthier lifestyle. These are a giant list of simple and easy eating tips that can help you live healthier … END_OF_DOCUMENT_TOKEN_TO_BE_REPLACED