Salt and sodium often get a bum rap. The fact is, sodium is an essential electrolyte in the body.  It helps muscles to function, regulates the balance of fluids and allows nerves to send out impulses.

The right balance of sodium is essential to our lives whereas too much sodium can lead to health problems, such as high blood pressure. This increases the risk of atherosclerosis (aka hardening of the arteries) and heart attack and stroke. 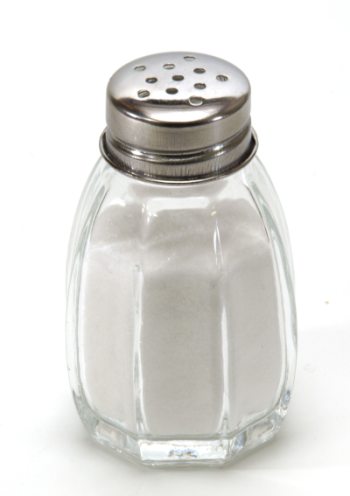 Actually as a parent of a child that suffers from Kidney Disease I have learned quite a bit about Sodium.

Sodium does not have any calories and does not affect weight. However, too much sodium can make a person retain fluid, which in turn can make a scale go up.

Even if dieters know its “only water weight,” seeing a scale rise for any reason can be discouraging.

Sodium can also make a person feel bloated (surprisingly, the solution is to drink more water).

Caution: Often food high in sodium will be high in calories. Although the sodium may only cause fluid retention, the French fries the sodium is on can definitely lead to a weight gain.

Generally speaking, the salt shaker is not the enemy. No one is likely to dump a teaspoon of salt on a baked potato and devour it. Ugh. And unless the family cook is heavy handed, sodium can be well controlled in the home. 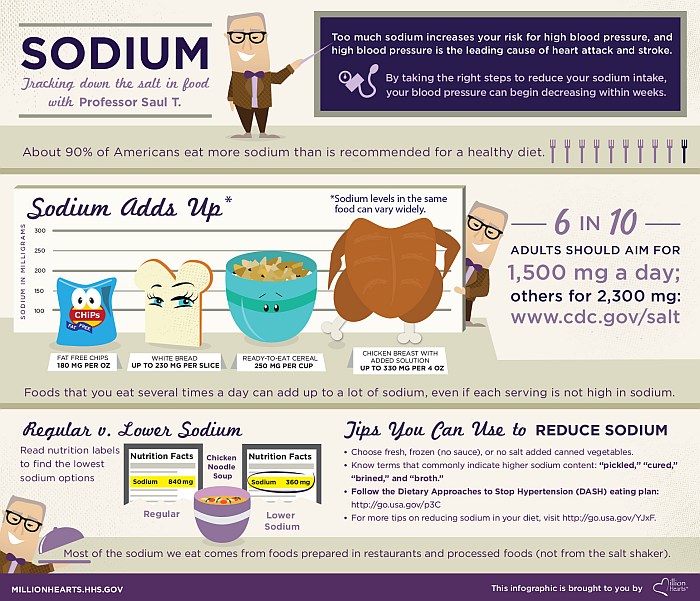 Sodium is found naturally in many foods and that isn’t a big problem either.

The real enemy is that salt is hidden in so many prepackaged and prepared foods. Sadly, so many foods that we find tasty are the result of high levels of sodium. Even at the deli counter, that delicious sliced turkey or roast beef can be full of sodium.

Even foods touted as “Low Sodium” can be misleading.  Federal law requires food manufacturers to print the sodium content on their nutrition labels.  When buying processed foods, carefully read the labels and then use common sense.

The list of high sodium foods to avoid represents a good portion of any supermarket – and includes processed meats, canned entrees (e.g., chili), instant soup, some cheeses, pizza, tomato sauces, and many varieties of breads, cereals!  And the list goes on…