Last night my daughter, wife, and I sat down (my son would rather play Minecraft) and watched Fat, Sick, and Nearly Dead 2. I liked it but when I posted about it on Facebook I got a comment that maybe I should be watching something a bit more uplifting.

Really, that was my attitude too when I sat down a year ago to watch the original Fat, Sick, and Nearly Dead. I thought “Jeez, why would you let that happen?”. In fact both movies are a bit inspirational with the idea of juicing and how drinking fruit and especially vegetable juices can change your life for the better.

What is Fat, Sick, and Nearly Dead 2 About? 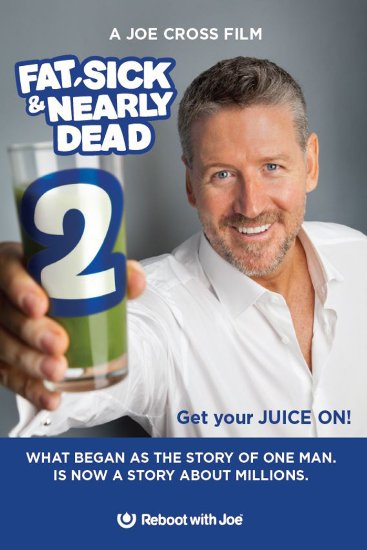 You can read my review of the original movie but this one was a lot different than the first. As we start the movie we have Joe Cross admitting that life is not all pixies and unicorns, there are tough times and he did gain and lose weight over the three years between these documentaries.

This is a great setup for the documentary as the next hour and a half takes us through why the juicing works, how to do a reboot, and what makes us eat crap in the first place.

First the juice. This is the part of most food documentaries that make me a bit nervous. I like to eat fruits and veggies a lot, I love them. Also I love to eat meat and grains, and as we all know apparently meats and grains are the downfall of all western civilization (I wouldn’t make a great Paleo guy).

Joe Cross instead tells us that there is a better way. When his diet, or weight, or energy have gotten a little off the rails he will do a reboot. The Reboot is when he will eat nothing but fruit and vegetable juices for a week or 10, or even 15 days.

After Joe has finished that reboot he will go back to eating what he would consider a regular diet which is juicing, fruit, and vegetables in the morning and during the day and then a regular dinner that would include fruits and vegetables and meat.

The great thing about Joe Cross and his attitude about eating is that it really lines up with how I believe we should eat. Living food like fruits an vegetables, and even grains are most important and meats are less desirable but fine to eat in moderation. And stuff like candy and ice cream? Those are foods with no redeeming values but are eaten on very rare occasion.

Our Relationship with Food

The other things that Fat, Sick, and Nearly Dead 2 deals with is the relationship that we have with food. Food is something that people use to comfort them, and give them satisfaction and this is a problem.

There are a few doctors that Joe Cross has on the documentary and one of them talked about exactly how people will make decisions to eat crappy food because of how the hormones that kick in with a lot of fat will make you feel satisfied and kind of doped up to make you feel better. This help people that are lonely, disappointed, or not satisfied with their life.

Another doctor (wish I caught the names) was saying that as we con ourselves into eating bad eating decisions by giving ourselves rewards. The example was when you are in a Starbucks and you see all the great looking sweets and you will say to yourself “Not eating than, and not eating that, and not getting that” after you have made 6 or 7 of these “good decisions” you will get to the end of the line and reward yourself with a big fat muffin for making all those great decisions.

I hadn’t thought of this reward idea before but wow it does make sense.

What Else in Fat, Sick, and Nearly Dead 2?

I may have learned quite a surprising amount in this movie, I thought it would just be a feel good documentary but there were so many great teaching moments as well. There is a lot more though.

Joe and one of the doctors talked quite a bit about the importance of support systems. Having support from like minded people is critical in anything we do. Also we got to see lots of feel good stories from people that were able to do the Juicing Reboot and found success and the fact that it is not crazy but actually cleansing and easier after a couple days.

The movie also has a lot of cute animations showing how our body and our brain work with food or lack of food.

What Are My Feelings About Fat, Sick and Nearly Dead 2?

I have to say that I really love this movie and even though I might have seen the first movie and a lot really was rehashed it was encouraging that maybe all the original questions were not answered and in this movie we get the opportunity to watch what juicing does and why from more angles.

What do you think of these kinds of documentaries? Are they interesting or boring? Do they encourage you or do they frustrate you?

I know that I have seen a lot of food documentaries that will make me feel guilty about eating meat or that make me want to picket some of those big companies that make food using terrible practices.

To me it is great watching a documentary live Fat, Sick, and Nearly Dead and this sequel. They may point out what we are doing wrong but just barely, instead the movies are more interested in encouraging us and showing us a better way instead.

Salt and Sodium Will Make You Fat and Sick

Is The Low Carb Diet Dead?