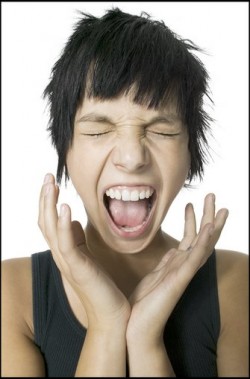 Researchers at the Keele University’s School of Psychology have found that uttering a string of expletives can actually lessen the effect of pain.

Dr Richard Stephens, who led the research, suggests that swearing may provoke a “fight or flight” response in people, with their heightened aggression helping them cope with pain.

The results may shed new light on to why some people feel the need to turn the air blue when they hit their thumb with a hammer.

Dr Stephens said he first got the idea for the study after his wife gave birth to their daughter.

He said: “There was a point in the labour where my wife was ‘effing and jeffing’ quite a lot.

“That got me thinking about how pain and swearing always seem to go together, and yet there had not been any research done in that area.”

In the experiment, which Dr Stephens carried out with colleagues John Atkins and Andrew Kingston, 67 student volunteers were asked to submerge their hands in ice water for as long as they could.

In one set of tests they were told to repeat a swear word of their choice, while in another they had to repeat a more commonplace word which they would use to describe a table.

The results showed that in nearly all cases, the volunteers were able to cope with the cold water for longer while they were swearing.

Vioxx, Celebrex and back pain

Bad Back Exercises: Can They Help Back Pain?