Understanding a migraine diet can help you choose which foods to eat and which to avoid. Food is certainly a trigger of migraines as many people have reported migraine attacks after eating something.

Knowing which foods trigger migraine headaches can help you prevent them from starting up in the first place. 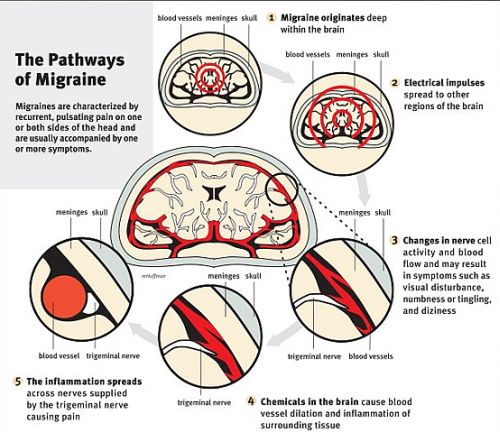 Foods which are rich in tyramine have long been suspected of causing migraines. While not particularly unhealthy, tyramine can produces migraines for people that are sensitive to it.

Knowing which foods are rich in tyramine can help you formulate a balanced diet. Tyramine is found in many foods with protein and increases in levels as food is aged or fermented.

Dairy products which are rich in tyramine such as aged cheese (cheddar, blue cheese, feta, etc.) can be triggers for a migraine. A migraine diet may allow for a few bites of cheese, but not greater than four ounces.

Cured meat such as sausages, hams and cured fish are also high in tyramine. It is best to stay away form these or limit servings to 4 ounces per meal. Vegetables like beans which are fermented such as miso, tofu or soy sauce and bean curd should also be avoided as much as possible.

Alcoholic beverages are also a migraine trigger. Beers, wines and mixed drinks can all cause migraines if consumed in excess of 2 bottles or glasses. Other beverages which contain caffeine may have differing effects on people. Overdose of caffeine as well as withdrawal from caffeine can cause migraines.

Chocolate and nuts may also be triggers. While they don’t contain tyramine, they do contribute to serotonin release. Serotonin does help in pain relief, but sudden production of serotonin during a period of low levels can cause constriction and dilation of blood vessels which does cause pain and migraines.

A well balanced migraine diet involves mostly freshly prepared ingredients. This greatly reduces the amount of tyramine found in your food. Carbohydrates from whole grains are also very helpful in making up the food you should eat.

Use fresh and unprocessed meat as much as possible. Vegetables rich in minerals such as kale, broccoli and spinach have also been shown to reduce migraine frequencies.

You should also eat regularly as much as possible. Hunger and stress are some of the triggers associated with migraines. Having a good meal schedule can help you fight both of these triggers. Drink plenty of water as well to avoid getting dehydrated.

Keeping A Diary Of Your Migraine Diet

Different food can have different effects on people. While some foods may seem innocent and unassuming, they can cause migraines as well. A migraine diet doesn’t always disallow you from enjoying a meal. Rather, it teaches you what kind of food and how much of it can cause migraines.

To help you along with your diet, make a log of the times you had migraines and what you were doing and eating at the time. This can help you link which foods cause you migraines. By living healthy and following a migraine diet, you will be able to prevent and avoid these painful attacks.

Signs and Symptoms of Migraine Headaches

How To Stop A Migraine