So what do you think? Are you shocked? This cover of Time magazine is sparking support and outrage all over the country and I guess for good reason. Everyone is a fan of breastfeeding until kids get a bit too old for their comfort.

Why is Breastfeeding Important?

Well first of all lets get to the root of the issue here. I have never seen a case where any study has said anything bad about the effect of breastfeeding on kids or their parents. Not only is breast milk very healthy for babies but it also helps to create that bond between mother and child helping them to protect the baby and to help the mother in the nourishing as well as loss aspects of child rearing.

No child can live for any length of time without some kind of milk product and the fact is that the American Academy of Pediatrics says babies should be breastfed exclusively for the first 6 months. Beyond that, the American Academy of Pediatrics encourages breastfeeding until at least 12 months, and longer if both the mother and baby are willing. 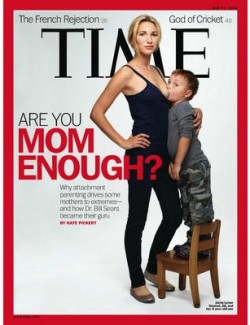 So the real shocking part of this whole story seems to be the picture itself, although I think that breastfeeding just kind of makes a lot of people feel uncomfortable. The woman on the Time Magazine breastfeeding cover is Jamie Lynne Grumet and she is actually standing in defiance while nursing her 3 year old (maybe 4 year old) son standing on this stool.

According to a poll this week 73% of the people who saw the cover felt uncomfortable with it. I am not one of these people. I saw the cover, was initially shocked at the pose, but them looked inside myself to see what was really wrong. My daughter was breastfed until 6 months, my sone was never breastfed, I have no issues with nudity, so the only thing that I think caused me to recoil initially was my own sense of self values in the media. I am sure Time magazine knows this as well.

This is a very important issue I think. Women are encouraged to breastfeed, but never in public, and then expected to stop at 6 months. What is they decide to go longer? Not going to hurt the kid, not going to hurt me. This has to be looked at as a civil right for women, no need for us non-women, non-breast feeders, to be judgemental of how someone wants to wean or not wean their child from the boob.

In the end I think this is just one more way that we need to look at ourselves and decide where our sense of morality is and why. Good for you Jamie Lynne Grumet

Breastfeeding And Smoking: The Facts