last night i saw the documentary called Food Inc on Netflix and wow I was blown away by the story and message. I am sure i would not do the movie justice by trying to recount it all but just wanted to point out a few things that really shocked and surprised me and made me think of the changes that we will all need to make to eat better.

What I learned from Food Inc. 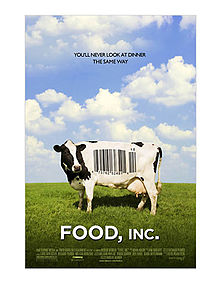 Cheap Fast Food – The real reason for a lot of the industrialization of the food supply has been pushed by the fast food industry and the push for the $1.00 hamburger. Over the years fruit and veggie prices have stayed the same or increased while the fast food industry has used the power of scale to drive down meat and potato costs. This is great for buying fast food but as we all know vegetables are better for us than hamburgers.

Giant slaughterhouses – I love eating meat, hamburger, steak, and everything in between, but one of the big changes over the last 50 years in food production is the assembly line that has radically dropped the number of slaughterhouses from 1000’s to just 13. The way that the cattle are raised in very small areas and slaughtered very close means that fecal matter and disease can easily make it into our food at the store.

Ecoli – One story is about a woman whos son died just 12 days after eating a hamburger infected with ecoli and the fact that there are very few safeguards in place because the big meat companies have so much control over govenment agencies. There used to be 6500 checks of facilities a year and that number with so much more meat being made has dropped to a fraction of that.

The Super Chickens – Chickens used to be full grown at 70 days but now they are full grown at 49 days. This may seem like an efficiency but in fact the feed, steroids, and antibiotics are creating unhealthy chickens that are so big so fast that they can not even walk. When disease runs through the chickens then new antibiotics are created to make them well enough. The trouble with this is the side effects of the food can make us sick. Who knows what kind of antibiotics and steroids we are ingesting from sick chickens that we eat?

Genetically engineered seeds – Monsanto, the chemical company created a soybean that they marketed in the 1980s that would be susceptible to round up pesticides. The great thing about this is that more soybeans could grow and less weeds so this should help farmers but maybe not. The farmers are being sued by Monsanto if they save their seeds as Monsanto has patented them. For us it is the thin edge of the wedge towards the genetically engineering of food that we do not know the effects of at all.

Bad Human Rights – No matter what the case is for all of the above food issues, one of the big issues in the food industry is low cost workers. Many of the plants are busing people in as cheap labor in slaughterhouses or even advertising jobs in Mexico and then having illegal aliens work for them. Trouble is it is the Mexican workers that get crap and deported and the companies do not even get fined for this terrible action. This kind of act makes me furious as it is artificial lowering of US wages which has been such a downward pressure on middle class incomes in the US anyway.


In the end it was a lot disgusting watching Food Inc. I learned a lot and I also was shocked at what I would have thought were great economies of scale really causing harm and health issues for all of us eating anything. I really hope you get a chance to watch this movie. There are also some takeaways the can help you make better choices

Again all of these choices are going to raise the cost of your food budget every month. Often this is a tradeoff as we are all stretched thin and at the same time we need to be healthy to live better lives. Hope you enjoy the documentary. Let me know what you think in the comments below

Food additives and ADD in kids