We have all experienced the feeling of failure when something we have attempted has not gone according to plan, and we are all familiar with that sickening feeling of defeat and despair- but it is possible to turn that failure into success.

We need to accept that failure will always be a part of our life, and the only way to avoid it would be to stop trying to achieve anything.

We first experience failure as a child- when we try to walk, we fall and stumble, but instead of feeling we have failed and we may as well stop trying to walk, we get back up and keep trying until we eventually master it. The key to changing failure into success is to completely change how we view failure.

Many people think that if they have failed at something, for example a business or a relationship, then this means that they cannot run a business or ever have a relationship. The key is to see each failure as a stepping stone to eventual success. Every time we fail, we learn how not to do something so we can choose to do it differently next time. 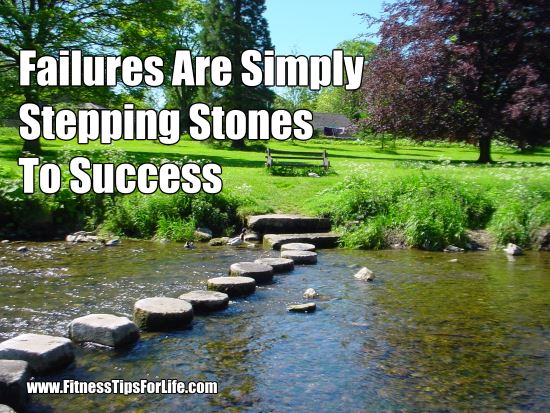 The person who failed at starting a business can take the lessons learnt and choose to run his next business differently with a greater chance of success, and the person who has failed in a relationship can choose to change aspects of their behavior to ensure that their next relationship works a lot better.

When we fail at something we need to stop feeling as though we have failed as a person– we just tried something which didn’t work.

Failure should not be taken personally. It is simply an event, not who we are.

We need to see failure as a requirement for moving towards our goals, and even learn to be thankful for our failures- we can learn such a lot from them. When you fail at something, take the time to write down why it failed, and work out what you could have done differently to prevent that failure.

Use Failure as Stepping Stones to Success

Use logic rather than emotion, and take full responsibility for the actions you took which resulted in the failure. Now you have a plan to avoid the failure when you try again in the future.

If you find that you are having difficulty getting over the failure, think of it as a stepping stone on the route to your eventual success, and remind yourself of your overall goal.

Take some time out and give yourself a little reward- we are not used to rewarding ourselves for failing, but it is time we started to celebrate our failures and the lessons we learn from them.

Don’t let the failure have a negative impact on your emotions and stop you from moving forwards towards success. If your current strategy isn’t working, don’t be afraid to stop what you are doing, reconsider and plan a different approach, even if a lot of time or money has already been invested.

Above all, remember that the person who never fails is the person who never tries or achieves anything. You will fail sometimes in pursuit of your goals, but it’s the lessons you learn from each failure that will help you to eventually succeed, and you will grow and develop as a person as a result.

Sometimes a failure can even open doors to even greater opportunities, for example if you fail to get the job you were after, you may see a better one, or even decide to start your own business. All it takes is a shift in your mindset to change that failure into success.

How to Overcome Failure

Life Mapping: A Vision of Success

Why Tracking Is Key To Weight Loss Success

1 thought on “Turning Failure into Success”