What do you do for exercise? Do you bike or walk? Why not do that on the way or at least part of the way to work.

Walking or biking to work, even part way, is linked with fitness, but very few Americans do it, according to a study of more than 2,000 middle-aged city dwellers.

In what may be the first large U.S. study of health and commuting, the researchers found only about 17 percent of workers walked or bicycled any portion of their commute.

Why Biking Is Better 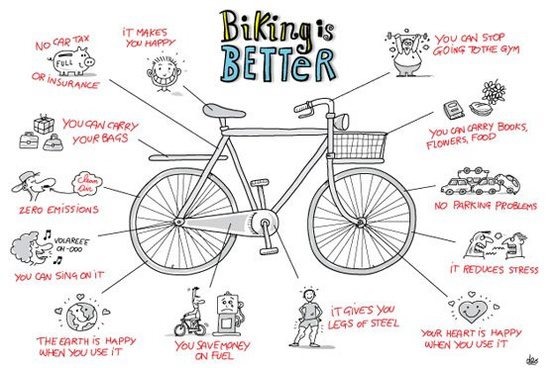 The new study is based on tests and questionnaires from 2,364 workers who were part of a larger federally funded study on heart disease risk. The participants lived in Chicago, Minneapolis, Birmingham, Ala., and Oakland, Calif. They were asked in 2005-2006 about their commuting habits in the past 12 months.

The study has a chicken-and-egg problem: The already-active people could be the ones leaving their cars at home. Gordon-Larsen acknowledged that fitness contributes to wanting to walk to work, but she said the reverse also is probably true.

Those active commuters did better on treadmill tests of fitness, even when researchers accounted for their leisure-time physical activity levels, suggesting commuter choices do make a difference.

For men in the study, but not women, the active commuters also had healthier numbers for body mass index, blood pressure, insulin and blood fats called triglycerides. Women walked or biked shorter distances and they may have done so less vigorously, the authors speculated. 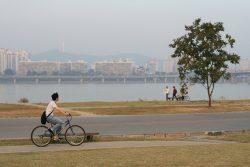 “I would love to bike to work, but it is completely unsafe for me to do so,” said Penny Gordon-Larsen of University of North Carolina at Chapel Hill, who led the study in Monday’s Archives of Internal Medicine. “There’s one real small, narrow area where there’s no bike lane.”

She drives to work, but first she walks her kids to school.

Prior research has found that the countries with the highest levels of walking and biking also have the lowest levels of obesity. But little research has looked at the health of Americans who walk or bike to work, said James Sallis of San Diego State University, who studies environmental factors and policies that influence physical activity. He wasn’t involved in the new study.

“I’m really glad to see people starting to take a look at this in the U.S.,” Sallis said.

Zoning in many U.S. cities separates workplaces from homes, lengthening commutes, he said.

A total of about 100 eating tips for a healthier lifestyle. These are a giant list of simple and easy eating tips that can help you live healthier … END_OF_DOCUMENT_TOKEN_TO_BE_REPLACED

Is it possible for a dieter to drink beer without getting a beer belly? Good news: Yes (with the right low calorie beers)! Bad news: No you … END_OF_DOCUMENT_TOKEN_TO_BE_REPLACED

I was told about this guy on YouTube called Alpha M a couple months back, his name is Aaron Marino but I love that he uses the name Alpha M as it … END_OF_DOCUMENT_TOKEN_TO_BE_REPLACED