Finding out what causes diabetes is something that has occupied researchers for very many years. Diabetes is a serious disease with several different forms.

What they have in common is that the body is unable to regulate blood sugar levels adequately, either because enough insulin is not being produced or because the body has become resistant to insulin.

However, the causes are not as obvious as many people think.

There are three main types of diabetes, although others do exist. The best known are type 1, type 2 and gestational diabetes. 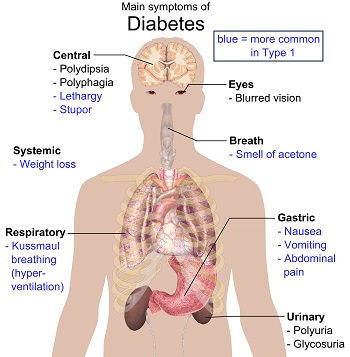 Type 1 diabetes is caused when the body’s own immune system attacks the cells in the pancreas that produce insulin, destroying them. Usually most if not all of the cells are destroyed and the body is unable to produce enough insulin to regulate the amount of glucose in the blood.

Type 1 diabetes can strike suddenly, without warning. It runs in families so experts now believe that some people are born with a genetic predisposition to become diabetic. However, this is not the only factor.

In identical twins with identical genes, when one twin develops type 1 diabetes there is only a 50% chance that the other twin will get it too.

Therefore, there must also be something that triggers the disease. This trigger factor may be a virus or something environmental. Experts are still not sure what causes diabetes type 1.

There is not much that can be done to prevent type 1 diabetes although some research suggests that breast fed babies are a little less likely to develop it, as are people who had vitamin D supplemented as babies. In older children, vitamin B3 (niacin) may have a preventive effect.

Type 2 diabetes develops as a result of the body becoming resistant to insulin. This causes the pancreas to work harder, producing more and more, until eventually it cannot cope with the demand. Then, blood sugar levels slowly begin to rise, often taking several years to reach a point where diabetes would be diagnosed.

There is no single clear cause of type 2 diabetes. In most cases it is a combination of factors and sometimes it can appear without any obvious cause. However, the following factors all make it more likely that a person will develop type 2:

Gestational diabetes is diagnosed when a woman who has not previously been diabetic develops diabetes during her pregnancy. It is similar to type 2 in many ways but usually either disappears or improves at the end of the pregnancy.

However, a high proportion of women who suffer from gestational diabetes will go on to develop type 2 later in life.

During pregnancy, it is quite normal for the body to produce hormones that alter the way that insulin acts. This is necessary in order for the baby to get enough glucose.

In most cases, the woman’s pancreas will simply adjust the amount of insulin, producing more so that her own blood sugar levels remain normal. In some women, however, the pancreas is unable to produce enough insulin to meet these extra demands. That is what causes diabetes in pregnancy.