You’ve served turkey for Thanksgiving but how about Turducken at Christmas?

Every year people will cook up a Turkey. One year maybe  you decided on chickens. Or even went all-out and tried a duck a few years ago. Are you looking for something new, something unique, to serve as the main course this Christmas?

How about taking all three of those birds and combining them into a single fowl monstrosity known as the turducken?

What is a Turducken? 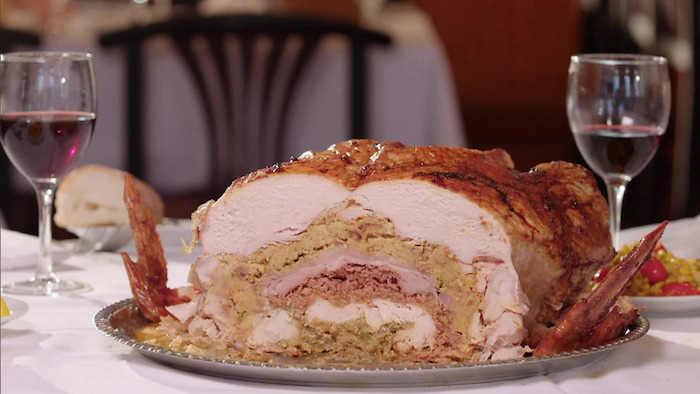 The turducken is not an entirely new phenomenon, as roasts of nested birds have been documented for centuries, such as the Yorkshire Christmas Pie, which consists of up to five birds nested and baked into a crust.

This layering of bird within bird, has even been traced back to the Middle Ages, when farmers would try to avoid husbandry taxes by hiding livestock inside one another.

The modern turducken, which is steadily growing in popularity, is generally attributed to the specialty meat shops in the southern United States, specifically Hebert’s Specialty Meats in Maurice, Louisiana.

Creation of this crazy but good sounding meal is often associated with the famous Cajun chef Paul Prudhomme, who created this dish as part of the festival Duvall Days in Duvall, Washington, in 1983. These claims are mostly unverified, and many people simply agree it is an idea that is centuries old.

Other Varieties of a Turducken

Other variations of the modern turducken replace the turkey with a goose, creating what is known as a gooducken. Or, you can wrap the turkey in bacon and create the bacon-and-bird-lover’s dream: a Turbaconducken.

There are several companies that prepare ready-to-roast turduckens, or you can tackle the somewhat daunting task of making your own. Many families get together at Christmas and split the work involved in the making of turducken. So if you’re looking for something unique to serve on your table this Christmas, try turducken!

Gastric Bypass is the wrong answer

How do the fitness programs I support differ

What is the Volumetrics diet?

Is The Low Carb Diet Dead?