Artificial sweeteners are everywhere. And I used to think a calorie is a calorie but maybe I was wrong. There is a good chance that your diet soda is making you fat.

Diet Blog has just posted the results of a study done on rats that shows that eating artificial sweeteners in the form of saccharin will actually make you gain faster then using the sugar itself.

I know that I have seen these kinds of results before and have always been confused by how it would work but essentially the thinking by the scientific community is that your brain notices the “sweetness” of the food and think that the artificial sweeteners it is sugar. and stores food as fat because the brain thinks that the body has more than enough fuel (calories) to keep it going.

I know that some people will say in seeing this that people are not rats but still physiologically this makes sense to me. Also, if you look at all the diet pop that is sold and people in North America just seem to be gettng bigger and bigger then maybe there is some merit in the conclusions of this research. 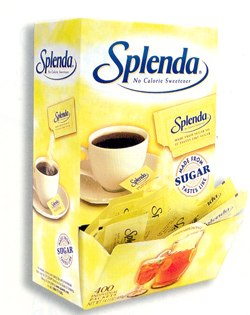 Does this jive with any other research? Well yes I remember that the University of Texas did a Diet soda study that showed that drinking one Diet Soda caused people to get fat and drinking two definitely caused gain. This was not a short study either, in fact the results were based on before and after 8 years. There would be a lot of other factors involved including the fact that people try to lose by replacing regular soda with diet for lower calories.

A common interpretation of the direct correlation between increased use of artificial sweeteners and increased incidence of obesity is that people have turned to calorie-free sweeteners as a means of reducing energy intake and controlling body .

However, our findings and theoretical framework are in closer agreement with the possibility that increased intake of no-calorie sugar substitutes could promote increased intake and body gain, which is consistent with recent data from prospective human clinical studies that have documented increased risk for obesity and metabolic syndrome in individuals consuming beverages sweetened with high-intensity sweeteners (e.g., Dhingra et al., 2007; Liebman et al., 2006). Although much research has been directed at selecting among these alternatives, a consensus opinion about the effectiveness of consuming artificially sweetened substances as means of control has yet to emerge

I have always been against diet soda anyway because they are usually sweetened with the artificial sweeteners Aspartame which as we all know is poisonous according to lots of studies, even in small doses.

So what can you take from this kind of study? Maybe that you should try to cut out all sodas or at the very least cut back and just drink regular sugar sweetened soda and take the calories for it instead. By all means look at artificial sweeteners as a problem and stick to non sweetened drinks or just water.

1 thought on “Do artificial sweeteners make you fat?”