Aspartame, a dipeptide of aspartic acid and a methyl ester of phenylalanine, is approved for use in pharmaceutical products and is being used increasingly in chewable tablet and sugar-free formulations. Labels for both prescription and nonprescription products must include the phenylalanine content. The major consideration in the use of aspartame in children is in patients with autosomal recessive phenylketonuria. Although heterozygotes do not appear to have clinically significant increases in phenylalanine after ingestion of even large amounts (equivalent to 24 12-oz cans of diet beverages), homozygotes with strict dietary restrictions should avoid aspartame. Children without dietary restrictions could safely ingest 10 mg/kg/day. Dietary consumption of aspartame is typically less than 5 mg/kg/day; young children, however, could ingest considerably more. For example, a 2-year-old child weighing 12 kg consumes 17 mg/kg from drinking one 12-oz can of diet soda and one serving of a sweetened product (eg, cereal, pudding, gelatin, or frozen dessert).

Headache is the most common adverse side effect attributed to aspartame but is seldom confirmed by single-dose double-blind challenge. Up to 11% of patients with chronic migraine headaches reported headaches triggered by aspartame; however, a double-blind challenge with three doses of 10 mg/kg given every 2 hours triggered no more headaches than did placebos in patients with vascular headaches believed to be exacerbated by aspartame. A small, double-blind 4-week trial showed an increase in frequency of headaches after ingestion of 1200 mg/d, indicating that a longer challenge period may be necessary.

In anecdotal reports, aspartame has been linked to various neuropsychiatric disorders, including panic attacks, mood changes, visual hallucinations, manic episodes, and isolated dizziness. A small, double-blind crossover study of patients with major depression revealed a higher incidence of reactions in these patients compared with nondepressed volunteers after administration of 30 mg/kg for 7 days; symptoms included headache, nervousness, dizziness, memory impairment, nausea, temper outbursts, and depression. None of these conditions has been rigorously proven to be caused by aspartame, but carefully conducted double-blind challenges may be indicated in patients with histories that suggest aspartame as a cause. Patients with underlying mitral valve prolapse or affective disorders may be at increased risk for neuropsychiatric effects; several studies have shown that individuals without psychiatric or seizure disorders do not demonstrate these effects.

Seizures have been reported via passive surveillance data collected by the FDA and in a few case reports. A recent analysis of FDA reports showed 41 cases of rechallenge with a temporal relationship to aspartame consumption. Most seizures occurred in patients who had an acceptable dietary intake, except for a 16-year-old who ingested up to 57 mg/kg of aspartame. Aspartame is generally considered safe for children with epilepsy. One study found increased spike-wave discharges in children with untreated absence seizures after a high dose of aspartame and suggested that children with poorly controlled absence seizures avoid aspartame.

Stay aware from the highly toxic sweetener aspartame and other questionable sweeteners such as sucralose (Splenda), and acesulfame-k (Sunette, Sweet & Safe, Sweet One). Please see the extensive resources for sweeteners on the Healthier Sweetener Resource List. http://www.holisticmed.com/sweet/ 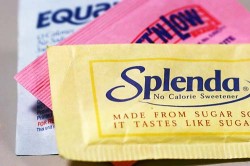 Saccharin may be present in drugs in substantial amounts. Ingestion of the recommended daily dosage of chewable aspirin or acetaminophen tablets in a school-age child would provide approximately the same amount of saccharin contained in one can of a diet soft drink. This amount, relative to the body of a child younger than 9 or 10 years, ingested for prolonged periods would be considered as “heavy use,” as defined in a major large-scale FDA/National Cancer Institute epidemiologic study. In this study, heavy use of artificial sweeteners was associated with a significantly increased risk for the development of bladder cancer. An independent review of this study concluded that there was no association.

An investigation of saccharin performed by the American Medical Association in 1985 concluded that bladder changes were species-specific, were confined to the second generation of male rats, and occurred in association with large doses (equivalent to several hundred cans of diet soft drink per day). The no-effect level was equivalent to 500 mg/kg/d.[68,69] Saccharin is not genotoxic; the presumed mechanism of toxicity is the binding of saccharin to urinary proteins (not normally found in humans), creating a nidus for the formation of silicate crystals, which are cytotoxic to bladder epithelium.

Saccharin is an O-toluene sulfonamide derivative and causes similar dermatologic reactions. Cross-sensitivity with sulfonamides has been demonstrated; therefore, children with “sulfa” allergy should also avoid saccharin. Hypersensitivity can usually be confirmed by a radio allergosorbent test for saccharin. In a series of 42 patients with adverse effects resulting from consumption of saccharin in pharmaceutical agents, pruritus and urticaria were the most common reactions, followed by eczema, photosensitivity, and prurigo. Other reactions include wheezing, nausea, diarrhea, tongue blisters, tachycardia, fixed eruptions, headache, diuresis, and sensory neuropathy.

Ingestion of saccharin-adulterated milk formula by infants was associated with irritability, hypertonia, insomnia, opisthotonos, and strabismus, which resolved within 36 hours after ingestion. Two anecdotal reports of an accidental overdose in an adult and a child discussed reactions of generalized edema, oliguria, and persistent albuminuria. Because of the paucity of data on the toxicity of saccharin in children, the American Medical Association has recommended limiting the intake of saccharin in young children and pregnant women.

stay aware from the highly toxic sweetener aspartame and other questionable sweeteners such as sucralose (Splenda), and acesulfame-k (Sunette, Sweet & Safe, Sweet One). Please see the extensive resources for sweeteners on the Healthier Sweetener Resource List. http://www.holisticmed.com/sweet/

Splenda, also known as sucralose, is an artificial sweetener, which is a chlorinated sucrose derivative. Facts about this artificial chemical are as follows:

A possible problem with caecal enlargement and renal mineralization has been seen in post approval animal research.

Another sweetener, stevioside, is championed by natural-foods advocates in the United States and is used in several countries, most notably Japan. Stevioside comes from the leaves of the stevia plant (Stevia rebaudiana Bertoni), a perennial shrub of the Asteraceae (Compositae) family native to Brazil and Paraguay. Stevia contains sweet-tasting glycosides, mainly stevioside; but also rebaudiosides A, B, C, D, and E; dulcoside A; and steviolbioside. Stevioside has a slight bitter aftertaste and provides 250 to 300 times the sweetness of sugar. It is stable to 200C (392F), but it is not fermentable and does not act in browning reactions.

In the 1970s, the Japanese government approved the plant for use in food. Japanese food processors use stevioside in a wide range of foods: pickled vegetables, dried seafood, soy sauce and miso, beverages, candy, gums, baked goods and cereals, yogurt, ice cream, and as a tabletop sweetener. In salty applications, stevioside modifies the harshness of sodium chloride. Combining it with other natural and synthetic sweeteners improves taste and functionality.

FDA considers stevia leaves and stevioside as unapproved, non-GRAS food additives. In 1992, the American Herbal Products Association (AHPA) petitioned the FDA to declare stevia as GRAS, citing historical usage and referring to numerous toxicology studies conducted in Japan and other countries. The FDA rejected AHPA’s petition, contending inadequate evidence to approve the product. The agency does allow the herb to be used in dietary supplements as covered by DSHEA (Dietary Supplement Health and Education Act).

It looks like sugar, tastes like sugar, cooks like sugar… well technically, it is sugar. But it’s sugar with almost no calories. It’s 100-percent natural – not synthesized, unlike other “sweeteners” that are chemically synthesized or derived from sugar, Tagatose is a naturally occurring sugar. And SPHERIX has discovered and patented a way to make it available for use as a food additive as well as for a variety of other uses.

It’s Tagatose, the only sweetener that tastes, looks, feels, and performs like table sugar. Tagatose can supply a major need for baked goods, ice cream, chocolates, chewing gum, and other food products that can’t be met by low bulk of high-intensity sweeteners. And it’s safe, with over ten years of safety research and numerous consultancies and world-renowned scientists reviewing the product. Scientifically known as D-tagatose, Tagatose occurs naturally in some dairy products and other foods. Our patented production process starts from whey, a dairy by-product. Tagatose has been determined to be a Generally Recognized As Safe (GRAS) substance in the U.S., with the FDA affirming the green light for the product with its “no objection” opinion, permitting its use in foods and beverages. Tagatose has also been determined GRAS for use in cosmetics and toothpastes, as well as in drugs.

Stay away from any Artificial Sweetener

Do artificial sweeteners make you fat?