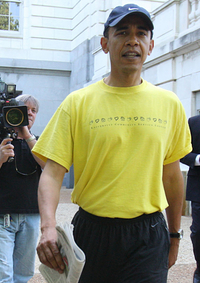 I was at the supermarket yesterday and while looking at the magazines I saw that Barack Obama was on the cover of one of the fitness magazines, I almost bought it to see why he would be on the cover but didn’t. I am still thinking about it today so I guess maybe I should go and pick it up this afternoon.

Anyway, back in May, Men’s Fitness magazine named Barack Obama one of its “25 Fittest” describing how Obama starts every day with a workout and generally skips fatty foods.

Fitness advocates hope Barack can inspire Americans to get active just as he inspired young people, minorities and those who never voted to go to the polls.

“He has an enormous ability to lead by example,” says Dr. James Hill, the co-founder of America on the Move. “Obama is the kind of guy who can have fun and make this inspirational. I’d love to see Barack Obama become a role model for physical activity and fun.”

Over the summer, one of the blogs on Politico.com posted an extremely detailed description of Obama working out at the Washington Sports Club in Dupont Circle.

The post overlooked nothing – the white headphones, the tricep presses with 15-pound dumbbells, the overhead extensions with 50-pound weights, the calf raises.

“If you ask people who aren’t active why they’re not, the biggest excuse you get is they’re too busy,” Hill says. “Who’s busier than the president?”

President George W. Bush has also found time in his presidency for reported daily workouts. But Hill doesn’t think Bush managed to get his athleticism to rub off on the rest of the country.

Philip Haberstro, executive director of the National Association for Health and Fitness, hopes Obama will use his skills as a community organizer to take the message of health and fitness into schools, churches and neighborhoods.

If Obama can get Americans to be more active, working it from the grass-roots level, Haberstro thinks the next president could curb the rising childhood obesity rate and rising health costs. Only two out of three adults get the level of physical activity they need, which is about 30 minutes a day.