Is it possible for a dieter to drink beer without getting a beer belly?

Bad news: No you cannot accompany that beer with nachos, pizza and peanuts.

Calories make us fat – whether they come from beer or chips and dip. Of course not all beers are the same. A light beer can be as low as 55 calories per serving whereas other beers can be as high as 185 calories. 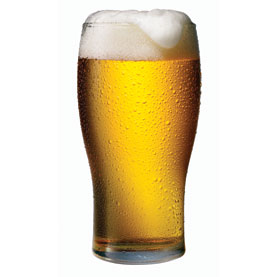 Thus a single light beer without a side of BBQ wings will not make you fat. A six-pack of high calorie beers with an entire pizza will definitely not help a diet effort.

Why do some people get protruding beer bellies while others put on weight everywhere else? The storage of excess pounds is determined by age and sex. Hormonal levels in men also matter – allowing those pounds (whether from beer or too much pasta) to become an unsightly paunch.

Carbohydrates (carbs) make glucose, which gives you energy. When it comes to beer (or any alcohol), the body processes the alcohol before the carbs. As a result, drinking slows down the burning of fat.

After your first couple of drinks, your brain also starts to increase its usage of GABA, This brain hormone will is what helps people sleep and will slow down your body and it’s metabolism.

What’s a dieting beer drinker to do?

If you drink one beer a week, there’s no need to do anything but enjoy. If you have a beer (or two or three) every night after work – or you enjoy a weekly beer party (a la Animal House) with buddies, it may be time to change your choice of beers to something lighter.

Of course not all beers are the same and finding an alternative to a high calorie favorite can be challenging. Below is a list of beers by calories. It’s up to you, the beer drinker, to decide the one that tastes best to you. Have fun!

If you like beer, but want to avoid the alcohol while being with your friends consider O’Doul’s (70 calories; 0.4% alcohol).

Also remember that alcohol takes a real toll on your body in other ways, not the beer here or there but more in the way that it damages the liver and causes dehydration.

These tips should help you in the reducing calories and still been able to hang out with friends while not “blowing your diet”. Really though social interaction is one of the most important parts of getting a real lifestyle change to stick as well as building in support from your friends

Between meals there is always that urge to eat a snack. I can attest to the fact that I am always hungry so when I found this list of 50 snacks under … END_OF_DOCUMENT_TOKEN_TO_BE_REPLACED

A total of about 100 eating tips for a healthier lifestyle. These are a giant list of simple and easy eating tips that can help you live healthier … END_OF_DOCUMENT_TOKEN_TO_BE_REPLACED