The thought of Mixed Martial Arts (MMA) for most people brings to mind two men locked in a cage, trying to knock each other out or making the other person submit through painful joint lock or choke.

However, MMA is much more than that.

For example, it is a great way to lose and get fit. Joe Riggs, a former Ultimate Fighting Championships (UFC) fighter, started MMA training weighing almost 300 pounds. He made a name for himself in the UFC fighting at 170 pounds. He lost all of that through MMA training. 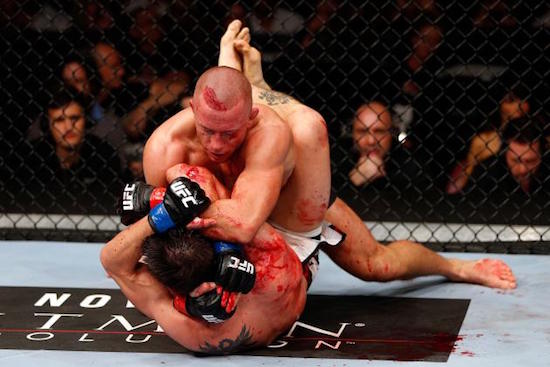 MMA schools typically offer courses in the individual disciplines with a combined MMA class for those who are more serious and considering actually engaging in an actual MMA fight.

Because of the skill level and physical conditioning required to fight MMA, most schools will not let people train Mixed Martial Arts until they have achieved a proven ability in at least one of these three arts.

The workout for any of these arts is intense. Students can expect a warm-up that includes a series of body- exercises, some with a partner and some without, that prepare the body for what it is about to face.

After the warm-up comes a technique portion where the instructor teaches a skill followed by the students practicing, or drilling, the technique until they have it down.

The technique portion of the class is followed by live drilling that allows the student to practice that technique against a fully resisting partner.

Students who wish to focus only on the technique and not engage in the live drilling can elect to do that instead.

People who use MMA training notice an improved level of conditioning pretty quickly. They are learning not only how to move their own bodies in ways that they never have before but they are learning to physically manipulate other people as well.

These classes leave the individual exhausted, exhilarated and ready to come back for more. MMA students will lose and stay fit regardless of whether they actually decide to engage in an MMA fight or not.

For those interested in fighting, understand that good MMA trainers will not let their students fight until they are capable of defending themselves in the cage.

Robbin Grey is a freelance writer who loves writing about MMA and other various martial art styles. Robbin is currently writing for the MMA Zone where she specializes in combining MMA training with health and fitness.

How Does Strength Training Help You Lose More Fat?

What is Circuit training?