An inclined board is a board so arranged that it will permit the user to perform the abdominal exercises with the body at an angle to the floor.

This apparatus is a board about 20 to 24 inches wide and 6 or 7 feet long, with a strap across one end of it. The end with the strap is placed on a stand or fastened to the wall to give the desired slant to the incline.

What Is An Inclined Board?

The steeper the slant of the board, the move difficult is the exercise. For most purposes, the height of the raised end of the board should be about 20 to 24 inches from the floor. 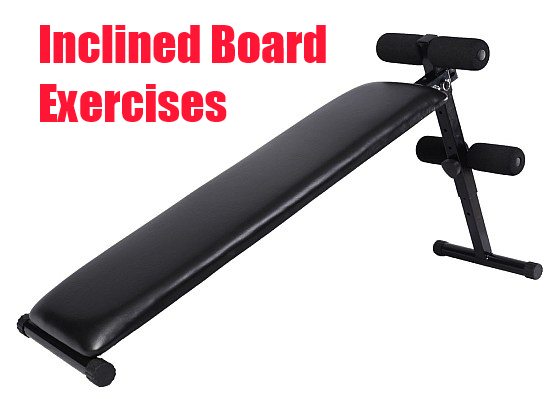 The incline permits the abdominal muscles to exert their pull over a longer range of movement. In movements with the feet held by the strap, the of the abdominal viscera is toward the chest cavity.

This relieves any possibility of pressure against the muscle wall by the viscera during the exercise. This is especially helpful if the individual has a small hernia or a tendency toward one.

The Sitting Up Exercise on the Inclined Board

Position: A sitting position on the board with the knees straight and the feet hooked under the strap to prevent sliding down the board.

Action: Keeping both knees straight and the chin on the chest, the exerciser leans backward until the lower back can just touch the board, then he returns to the sitting position.

If the arms are extended in front of the body, lie should sit up until he can touch the toes, or as nearly as possible. If his hands are clasped behind the neck, he should try to touch his elbows on his knees each time he comes up.

Breathing: Inhale as the shoulders are lowered and exhale as the sitting position is regained.

Starting Resistance: In starting this movement, it will be sufficient to hold the arms extended in front, if the movement is rather difficult. If the movement is easy, the hands should be clasped behind the neck.

Progression: The exercise should be started with 5 counts adding 1 count each week until 20 have been performed for three periods.

Goal: Girls and women should work up to a resistance of 20 counts with the hands clasped behind the neck. Some will find that they are able to do the motion with as much as 10 lbs. held in front of the neck and when this is possible additional benefit will be had.

Boys and men should work up to a resistance of 25 lbs. in front of the neck, performed for the 20 counts.

Results: This movement strengthens all the muscles of the abdominal area but particularly the front abdominal muscles. When the motion requires more effort, the muscles in the side walls of the waist are brought into action more strongly.

Comments: It is more difficult to do these movements on the inclined board than it is on the floor. There is also a greater tendency to go completely back on the board till the head and shoulders touch the board.

This should not be done . . . it is most important that the trunk go back only as far as necessary for the lower back to touch the board. When the low back touches, the sitting position should be regained with no relaxation of the contraction of the waist muscles.

If the head and shoulders are permitted to touch the board, we activate too much forward pull on the lumbar spine by the deep psoas muscles.

The Hip Raise on the Inclined Board

1 thought on “Inclined Board Exercises”