Telomeres have been compared with the plastic tips on shoelaces because they prevent chromosome ends from fraying and sticking to each other, which would scramble an organism’s genetic information to cause cancer, other diseases or death.

Telomeres are actually sequences of DNA.

Telomeres prevent a chromosome’s DNA from being eaten away. Previous studies have shown that telomeres shorten with age and linked short telomeres with several diseases. What no one has yet been able to say is if truncated telomeres cause health problems or are a side effect of aging and poor health. 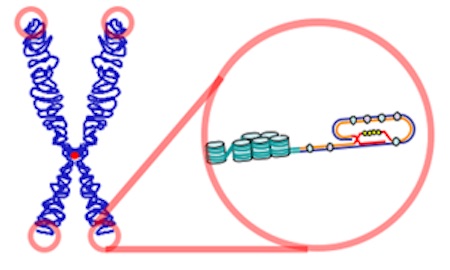 There is also an enzyme called telomerase which is a very important enzyme in the growth, shortening, and control over the size of the Telomeres.

The science and health hopes in the interaction between telomeres and the telomerase enzyme is very scientific adn very interesting to say the least.

Telomerase relengthens the telomeres so that they get the same length as before embarking on cell division.

The Science Behind Telomerase

Stig E. Bojesen, a researcher at the Faculty of Health and Medicial Sciences, University of Copenhagen, and staff specialist at the Department of Clinical Biochemistry, Copenhagen University Hospital, Herlev, has headed the efforts to map telomerase — an enzyme capable of creating new ends on cellular chromosomes, the so-called telomeres. In other words, a kind of cellular fountain of youth.

The surprising finding was that the variants that caused the diseases were not the same as the ones which changed the length of the telomeres. This suggests that telomerase plays a far more complex role than previously assumed,” says Stig E. Bojesen.

Scientists are not yet sure. But they have been able to use telomerase to make human cells keep dividing far beyond their normal limit in laboratory experiments, and the cells do not become cancerous. Mice engineered to lack the enzyme, called telomerase, become prematurely decrepit. But they bounced back to health when the enzyme was replaced. The finding, published online in Nature, hints that some disorders characterized by early ageing could be treated by boosting telomerase activity.

Fountain of Youth in a Pill?

Advocates of human life extension promote the idea of lengthening the telomeres in certain cells through temporary activation of telomerase (by drugs), or possibly permanently by gene therapy. They reason that this would extend human life because it would extend the Hayflick limit.

So far these ideas have not been proven in humans, but it has been demonstrated that telomere extension has successfully reversed some signs of aging in laboratory mice.

Also, the Salk institute has released studies on Telomerase

Studies have found shortened telomeres in many cancers, including pancreatic, bone, prostate, bladder, lung, kidney, and head and neck. As a cell begins to become cancerous, it divides more often, and its telomeres become very short. If its telomeres get too short, the cell may die. It can escape this fate by becoming a cancer cell and activating an enzyme called telomerase, which prevents the telomeres from getting even shorter.

Most adult body cells, however, keep telomerase tightly controlled and not very active. As this happens, telomeres eventually shorten. When they have shrunk to a certain length, the cells can go into retirement and stop dividing. Cancer cells, on the other hand, often increase their levels of telomerase so they can divide indefinitely.

Some research has shown that the enzyme telomerase makes cancer cells immortal, could it prevent normal cells from aging? Could we extend lifespan by preserving or restoring the length of telomeres with telomerase? If so, does that raise a risk the telomerase also will cause cancer?

To find out, researchers at Kaiser Permanente and the University of California, San Francisco measured telomere length in 110,266 people in northern California. The participants are part of an ongoing project that explores links between genetics and health. This study is the largest ever to examine telomeres’ role in health.

The 10 percent of people with the shortest telomeres had a more than 20 percent higher risk of dying than people with longer telomeres, Catherine Schaefer, an epidemiologist who directs the Kaiser Permanente Research Program on Genes, Environment and Health, reported November 8 at the annual meeting of the American Society of Human Genetics.

“It seems as though once your telomeres get critically short, your risk of dying goes up,” she said. The increased death risk is about the same as for people who drink 20 to 30 alcoholic beverages per week or smoke for 20 to 30 years. “It’s a modest increase, but it’s not nothing.”

Higher body mass index, or BMI, was associated with longer telomeres. The discovery is counterintuitive, Eisenberg said, because higher BMIs —those associated with being over or obese — are linked to a variety of health problems including diabetes and heart disease

The phenomenon of limited cellular division was first observed by Leonard Hayflick, and is now referred to as the Hayflick limit. Significant discoveries were made by the team led by Professor Elizabeth Blackburn at the University of California.

Dr. Blackburn has developed such a test and also founded a company to market it. There will be a test on the market soon. For a few hundred dollars, interested people could learn whether they have short or long telomeres.

Lower Back Exercises To Relieve Back Pain