So I had a friend share this video that is kinda funny, kinda good, and very inspiring.

The fellow is talking about finding a good after workout snack that is high in protein.

And it leads to making homemade Mango Frozen Yogurt in a gym changing room. The guys name is Tom Daley, he is pretty popular on YouTube and is an elite level swimmer. The chef? Don’t know who he is.

I have now watched this video a few times and finally my daughter and I made it last night. We liked it but I have a few things to say about this.

First of all the changing room looks pretty clean but not so sure. Are we supposed to bring blenders into the gym changing room?

And, where do you store frozen fruit and yogurt in a gym?

So, seriously, I was really inspired by this video mostly because we tend to have frozen fruit in the freezer and secondly because I love frozen yogurt but not regular yogurt. I always think of frozen yogurt as something more like ice cream than something good for you. 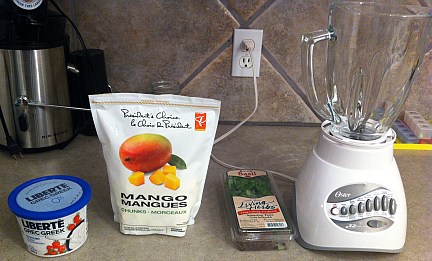 This Frozen yogurt recipe calls for very few ingredients and as my daughter and I “researched” (surfed around) YouTube we got more ideas.

In the end we tried making our Mango Froyo with these three ingredients:

The original recipe called for plain yogurt, a bit of zest of a lime, fresh basil, and frozen Mango so we were pretty close. Sadly we had no lime or plain yogurt but I purposely want to try the greek yogurt as it is very basic and higher protein.

When you watch the video above it sees actually like they are using a food processor instead of a blender actually and I am guessing that may work better. If you think about what we made it is pretty close to making a basic smoothie.

After we had blended ours up it was not nearly as thick as the one in the video, which was awfully disappointing so we needed to put it in the freezer for an hour or so. 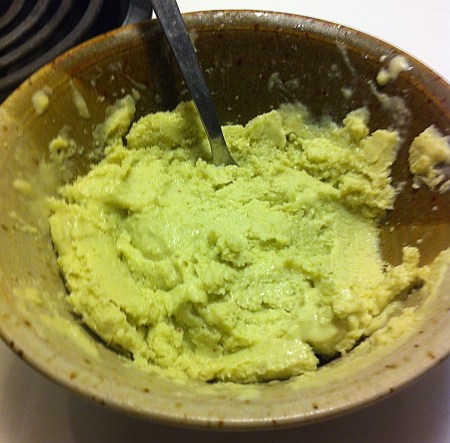 What Would We Change?

When the Mango Frozen Yogurt came out of the freezer it tasted great although if you are not used to greek yogurt it is a bit overwhelming at first.

Also, we may have put a bit too much of the basil in there (look how green it was).

One other thing I think I would do next time is try regular yogurt.

I have had lots of problems over the years just trying to stay on track. You know, really staying focused. The problem is that you start a new … END_OF_DOCUMENT_TOKEN_TO_BE_REPLACED

Yesterday for a change I decided to cook up some quinoa for breakfast. Last fall when I was at Disney World the hotel had that at breakfast every … END_OF_DOCUMENT_TOKEN_TO_BE_REPLACED