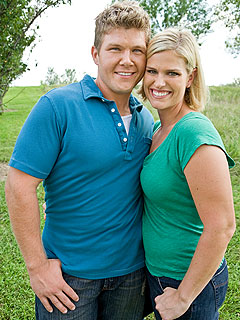 My wife starts her day looking at the headlines on the People Magazine website and this morning saw this article about to Biggest Losers having a baby….and there is a picture of how they look now.

Marty Wolff and his wife Amy met during the third season of NBC’s The Biggest Loser in 2007, got married in March 2008, and now are expecting their first child in July 2009, PEOPLE has learned exclusively.

Although they had been talking about having kids during their courtship, “After we got married, at a certain point, we let nature take its course,” Amy says. “We are very excited!”

The Wolffs, who live in Omaha, Neb., run a loss and self-improvement program called Reality Wellness. They also help organize local competitions, such as Shape Up Omaha, focused on getting folks fit.

“We take a token of what we learned on The Biggest Loser and applied it,” says Amy. “We’ve helped 250 people this past year lose 5,000 pounds!”

Having kids can make you fat