Late on Friday and Saturday nights I will lie in bed and watch a movie on my iPad on Netflix. It is a nice quiet time for me and I tend to watch stuff that no one else in the house would care about. Last night I watched the documentary Ride the Divide.

Ride the Divide is just about an hour and a half long and it follows closely three people out of 16 people in total that do a bicycle race from Banff Canada to the US-Mexico border. The ride is purely individual although everyone is tracking each other and supporting each other as much as they can. There are no teams, or team support like you see in the Tour De France. 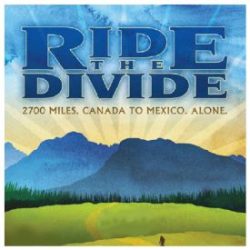 Toughest Bike Race in the World

I won’t spoil the result but the winner takes about three weeks and the last take about five weeks to complete this race. Not only is the distance absolutely ridiculous but since the race goes down the continental divide they have to deal with mountains, snow, rain, and crazy elevation changes all the time while trying to ride as far as they can every day. Oh, and lots of wildlife as lots of the riding is not on highways but trails instead.

The riders ride as long as they want everyday and they tend to stop where they can in hotel or tent and eat from gas stations, restaurants, or grocery stores. Early on you would see four or five people riding together and stopping at a gas station to get some snacks to get them going, there was a vegan that was struggling to find food but all the riders are very concious of how many calories and type of food they need to keep themselves going.

As the race goes on the riders definitely get spread out and there are all kinds of emotions going through the ride the divide riders, loneliness, fear,  boredom, exhaustion.

And how about the physical toll that these guys go through? One of the riders, Mary Metcalf-Collier goes from strong, to swollen knees and ankles, to better, to worse and back again. I could feel for her everyday of the race as she kept persevering. Another racer Mike Dion left his family for a few weeks to race and had terrible knee problems as well that went away and then came back, while the third racer being followed seemed to have no physical problems at all.

The music in Ride the Divide is great. The scenery is spectacular and the music used compliments it perfectly. for a late night movie Ride the Divide was a fantastic way to spend and hour and a half to see a crazy race with real people competing against themselves and the elements. I know that the maker of the movie has a follow up movie and am looking forward to seeing that one as well.

How to Eat Clean

Fruit Will Make you Beautiful